Heading from Quechee to Dorset required a bit of backtracking, but we were driving through lovely Vermont countryside, so we didn't mind.

As we were driving through Rutland, Vermont, this store caught Lori's eye. We didn't quite stomp on the brakes, shift into reverse on a busy road, and back up to the store; we merely pulled in at the next parking lot, turned around, and hastened back with all due speed. 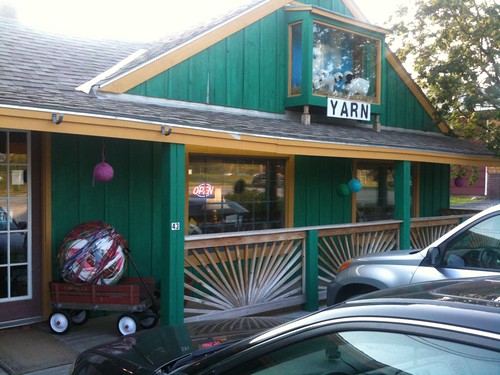 I believe that this is the yarn-store equivalent of a chicken statue in front of a restaurant: 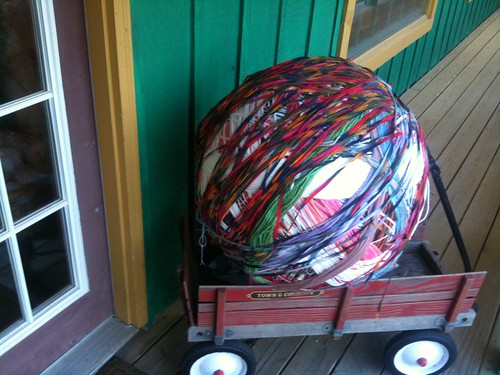 The yarn store had signs in the windows saying "Knit Locally", and a section of advertised-to-be-local yarns. So I ended up asking the proprietor about the virtues of local yarns, with an eye to whether local yarns were distinctive in Roadfoody ways.
Was there a distinct character of local yarn? Well, not really, except that they all took their wool to one spinner, and maybe that imparted some general characteristics, but she couldn't really identify anything local.
Were there yarns that could only be obtained locally? Yes, there were, but they were all heavy, coarse yarns that weren't very nice to the hand.
So I am not really convinced by this "Knit Locally" proposition the way I am about local food.

In Dorset, we ate dinner at the Dorset Inn, which was probably the single nicest meal we ate on our trip.

The Dorset Inn has been in continuous operation since 1796, which is much more impressive than the 1976 my fingers keep typing. A stately white building with white columns, it is nestled among other picturesque white buildings on the village green. Lori was entranced by the white and green town square - she said it looked like a painting from a classic book. 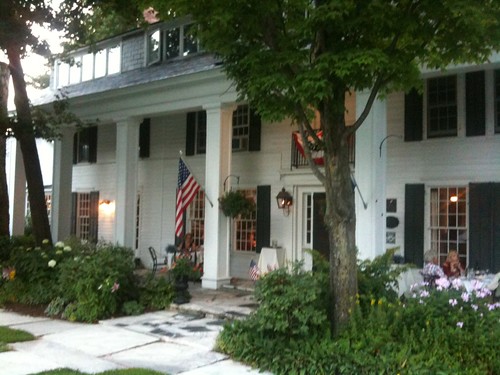 For an appetizer, we had the Vermont Ploughman: "Smoked Vermont pheasant & apple paté, Cabot clothbound cheddar, Vermont sausage & Rupert Rising bread". It was quite good; I particularly liked the smooth savoriness of the pate on the crisp tart apples. 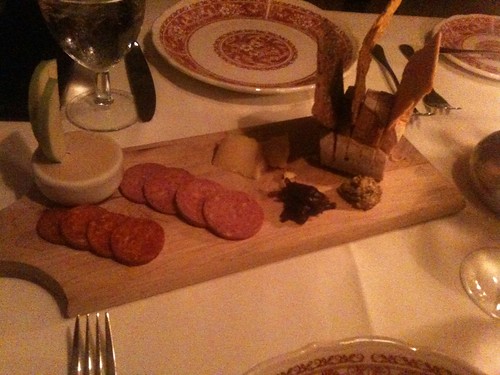 My entree was the Mother's Chicken, and it was amazing.
The chicken was outstandingly rich and flavorful, with a mouthwatering crisp skin.
The corn tasted extremely fresh and bright, with just a touch of butter to underline the splendid fresh-corn flavor.
I remember that the broccoli was outstanding - I no longer remember what made it so good, but I remember telling Lori "You must try this broccoli!" (Lori is less of a broccoli fan, and though she agreed it was good, she didn't rave about it the way I did.) 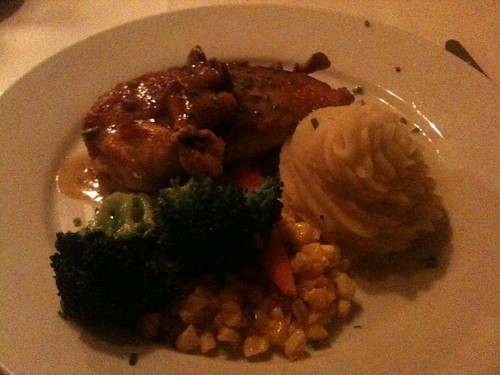 Lori got the turkey croquettes, which were tender and moist and very very flavorful. The seasonings were perfect. One of the chefs chatted with us for a moment and explained that it was hard to serve roast turkey in a restaurant, because you couldn't easily serve a big bird fresh from the oven to order - but turkey croquettes made it possible to serve turkey whenever it was ordered. Lori says the corn and peas on the side tasted like they'd been harvested that morning. Everything on both plates was mouthwateringly perfect. 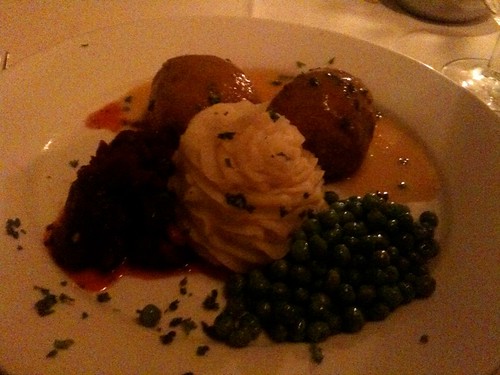 At one point in our planning, we had thought to spend the night at the Dorset Inn, but we had decided not to in hopes that getting a few more hours of driving in would let us see more of Maine the next day. However, as we were eating, travel fatigue set in, and we were entranced by the decor... so when Lori suggested that she ask about a room for the night, I agreed. She came back with the news that she'd been offered a rate for bed and breakfast that was far cheaper than the "Mid-Week Gourmet Getaway" that we had been considering in our early planning. Bonus! 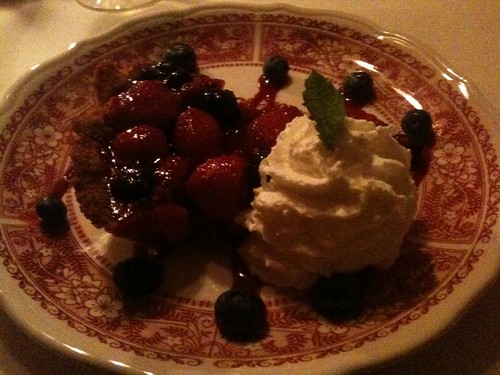 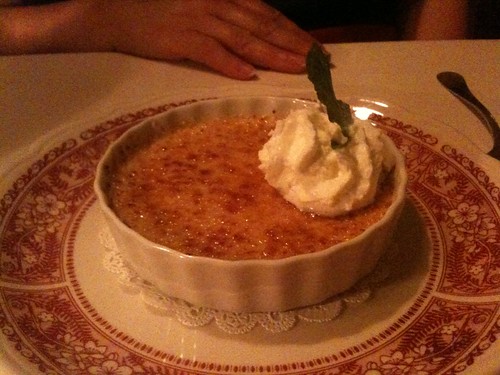 We weren't driving any farther, so to accompany our desserts, we shared a glass of Eden Ice Cider. Ice cider is like ice wine; the apple pulp is frozen and the ice removed to concentrate the pulp before fermentation. This was amazingly good, much more apple-y than a good apple. After one sip, I said to Lori, "these Vermonters have been holding out on the rest of us." After a second sip: "to be fair, I must acknowledge that if I had this stuff, I'd be very tempted to drink it all before letting it leave the state."
A running subplot of the rest of our trip became seeking out more to bring home. Since I'm posting so slowly, I'll summarize that plot: after failing to find it at four or five liquor stores, we finally managed to find it at a specialty liquor store in Salem, where we bought all three bottles they had in stock. 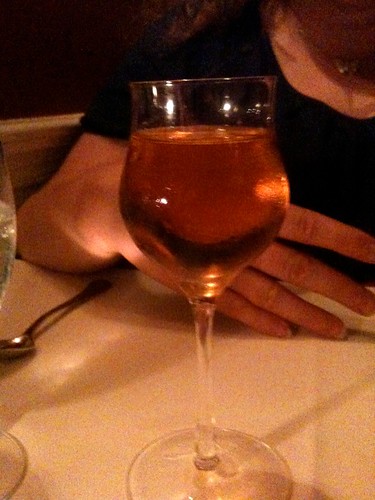 We were delighted with our dinner at the Dorset Inn and recommend it highly.

Next: Breakfast at the Dorset Inn

I knew that iBooks would sync your book-reading (notes, highlights, and so forth) across multiple devices that had loaded a book. But opening a book on my iPhone and having it open to the place I'd read to on the iPad really feels very magical.
Collapse