I got this email today:

This is pretty typical - of all the phishing e-mails that I've recognized, all of them have had atrocious command of english.

Posted because I want to think about this more at length later:

Chronic stress, as biology professor Robert Sapolsky will tell you, is not good for us. It harms our brains, weakens our immune systems and generally makes us difficult to live with. So Sapolsky aims to save us from ourselves. He plans to develop a vaccine-like treatment that will reduce the unhealthy effects of long-term tension.
http://www.wired.com/magazine/2010/07/ff_stress_cure/

At this moment, I'm fascinated by the okcupid blog. The post that drew me in was this discussion of effective photos for their dating site:
http://blog.okcupid.com/index.php/dont-be-ugly-by-accident/

I'm sure that the specific reason this was called to my attention was the "iPhone users have more sex" chart.

We stopped for a shopping visit at the Vermont Country Store, because Lori wanted to see the place that had sent her so many catalogs. Lori found a great many things to consider buying. I mostly hung out in the food section trying all the free samples. We did buy a couple of Vermont Country Store-branded sodas for the journey. I found my Raspberry Lime Rickey pleasant, but much sweeter than I would have found most refreshing - mind you, I think I like much less sweetness in my beverages than most people. Lori's vanilla cream soda was a pretty good cream soda, but not outstanding. 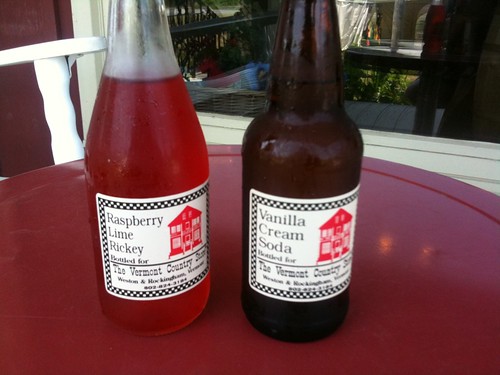 We saw New Hampshire only by highway. We made arrangements for a late lunch with a Warcraft friend; he claimed that Andover, New Hampshire was almost devoid of restaurants of any quality, and he claimed (without contradiction from Roadfood.com) that Concord, New Hampshire had no restaurants of local note. So we met him at a T. G. I. Friday's in Concord. The conversation was pleasant, but I realized when we left that I had no memory of my sandwich other than the taste of the Italian dressing on the accompanying salad. Enough about Friday's.

A backwoods drive through lots of pretty scenery led us to Shaw's Ridge Farm, a dairy farm / miniature golf course / barbecue restaurant / ice cream shop. We were intent upon seeking it out, because the intrepid researchers behind The Quest for the Best Ice Cream of New England had given it stellar reviews, and we felt a purely academic (those two words are a lie) interest in confirming their research. (For Science!)

There were lots of pretty flowers around the ice cream shop: 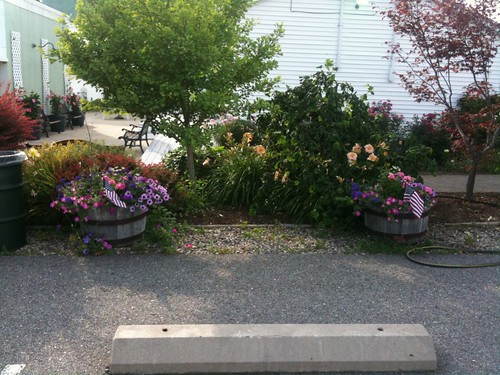 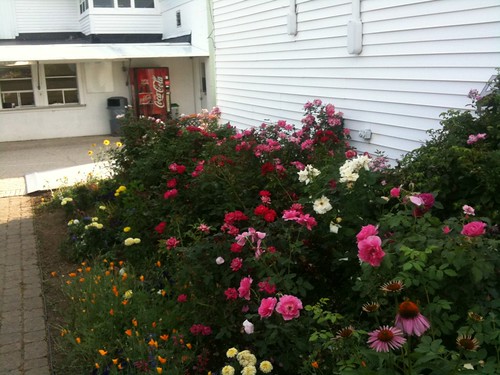 And the grounds had a very cute playhouse that made me wonder if there was a story there: 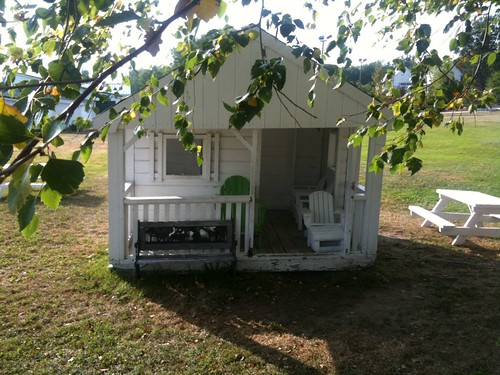 Lori got a hot fudge sundae made with the native blueberry ice cream. As buffetbuster has pointed out, sundaes pose a problem for photography, because all that shows is whipped cream. Lori judged it excellent; I recall that it had a vivid blueberry flavor. 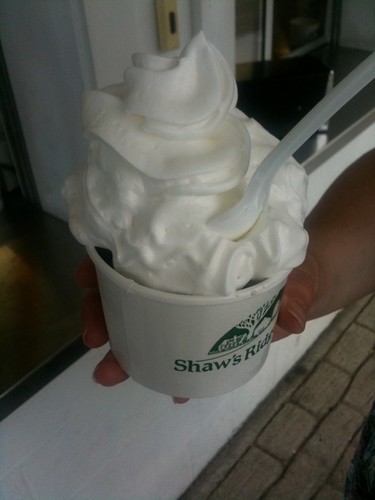 I chose the native strawberry ice cream, because the Best New England Ice Cream report said, "The standard by which all strawberry ice creams should be measured. If every strawberry ice cream tasted this good, people would switch their ice cream allegiance from chocalate to fruit flavors." Unfortunately, with the utmost respect to my esteemed colleagues, I was unable to replicate their results. The ice cream was pretty good, certainly, but it had large strawberry chunks and whole strawberries. What's not to like about whole strawberries? Well, when frozen into ice cream, they turned into big slushy hunks that did not have the creamy texture of ice cream. I would have enjoyed this ice cream much more if the strawberries had been chopped small enough that I got ice cream in every bite, instead of having bites that were nothing but strawberry slush. 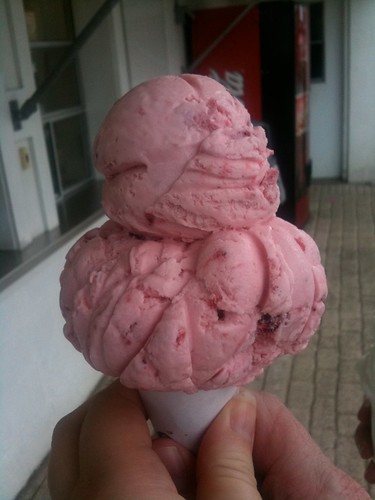 I'm not sure what possessed me to sample the barbecue sandwich. It wasn't hunger. Perhaps it was just a recurrent perverse curiosity to see what happens to foods whose authentic forms I know when they are taken far out of their native element. (The clearest example of this was probably Haus der Taco. But I digress.) Unfortunately, in my judgement, Shaw Ridge Farm should stick to ice cream. The beef brisket sandwich was fairly tough, and it was not sliced against the grain, so it came out in long shreds that needed to be worried at to tear off a bite. We ended up discarding the sandwich mostly uneaten. 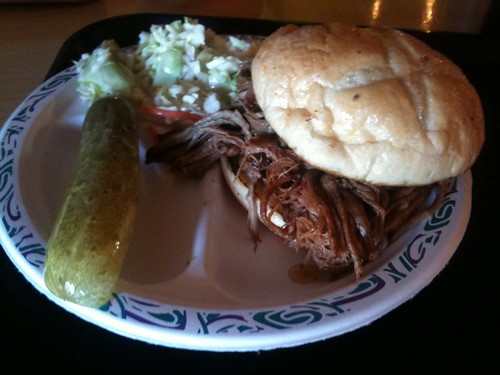