From the Salem Visitor's Center, we learned that Salem is not just the home of witch trials, but also the home of Nathaniel Hawthorne. The witches get much more of the advertising, though - which is probably just as well, because it would be hard to make a recognizable caricature of Nathaniel Hawthorne to decorate an ice cream stand. The House of Seven Gables (the setting for the Hawthorne novel of the same name) sounded interesting, and I was in a strong mood of "Don't plan ahead. Pick an interesting thing, do it, repeat." So we went to the House of Seven Gables.

Two pictures from the walk to the House of Seven Gables: 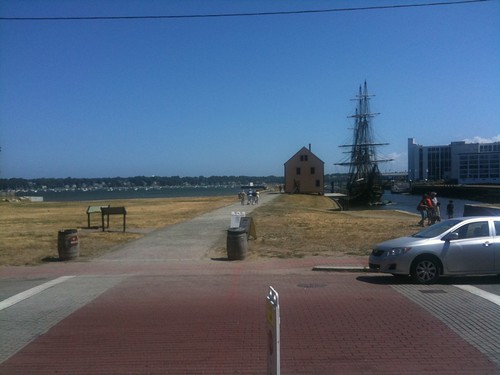 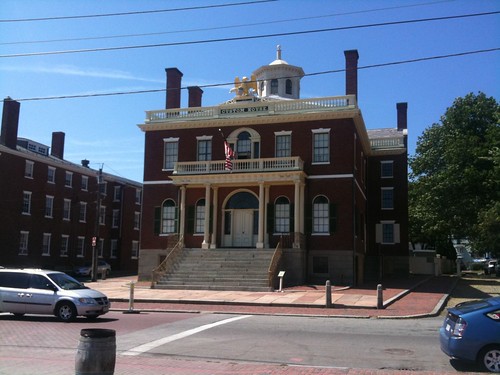 It was an interesting tour. (No photographs inside the House of Seven Gables, because they weren't allowed.) The house was a mansion, but it had grown progressively from a much smaller house, and it showed several different styles from its development.

I found it particularly interesting that the House had been restored in 1913 - but restored to match the novel in ways that had never been real before:
• A secret staircase was added to support one scene in the novel where a character appears in the living room by surprise.
• A cent-shop was added in a front room because one of the characters in the novel ran such a shop, though there had never been a shop in the house.
• Even the seven gables were a reconstruction-to-novel. There had been seven gables on the house, but I believe there had not been seven gables all at once, and I know that there were only five gables on the house at the time Hawthorne was familiar with it.

The tour included one of the best visual aids I've met: they had a model of the house made of several blocks, so the docent was able to say "The house started as this small block. Then (adds block) they added this addition onto it. Then they removed these gables..." It was really well done.

The gardens around the house: 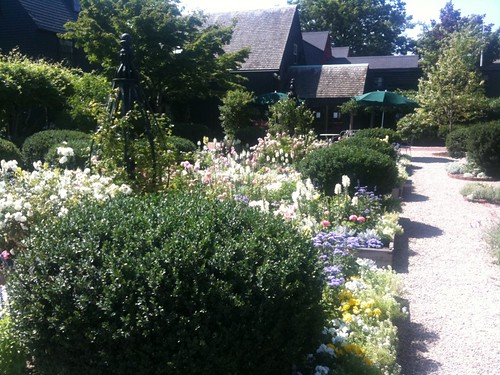 The House of Seven Gables itself: 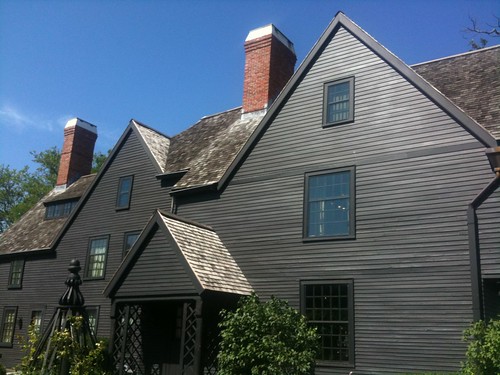 Across the street from the House of Seven Gables was Ye Olde Pepper Candy Companie, a candy store. I'm usually suspicious of anything called "Olde", but this place seems to have some legitimate claim: they say that they're the oldest candy company in the United States, dating back to 1806. Their candy specialty is Gibralters, large diamond-shaped lozenges (about the size of a business card) with about the firmness of an after-dinner mint. They were reasonably tasty, but I won't be responsible for bringing them back into fashion. 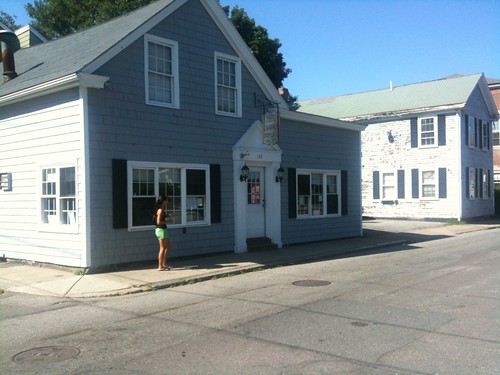 It was yet another hot and humid day, so we stopped for ice cream at Captain Dusty's. This wasn't Roadfood-listed (or mentioned in the Roadfood Best Ice Cream in New England), and it's probably fair that it's not - or maybe I adjusted my experience to match my expectations. I had a raspberry lime freeze, which was pretty good but too sweet for my taste; Lori had a scoop of bobcat ice cream, which turned out to be butterscotch with chocolate chips. 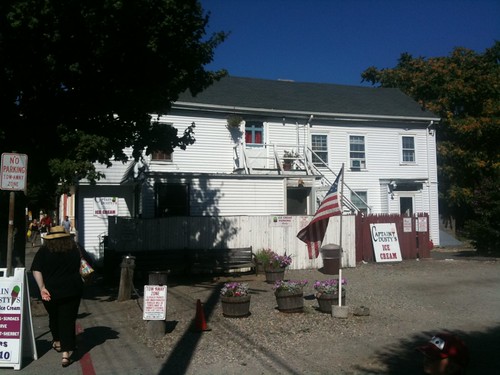 I'm probably being too harsh on Captain Dusty's, because it did have some definite individual character - check out the Doggy Sundae on the menu board. 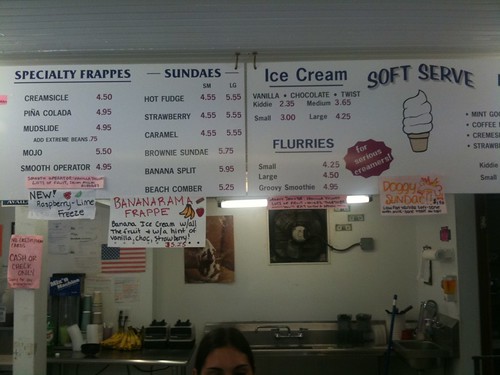 Up next: walking tour of Salem

The Salem Witch Trials Memorial has stone benches engraved with the names and fates of the victims. Many of the benches were scattered with pennies, and in some cases, the pennies were arranged into patterns. We learned later that the pennies are a recent occurrence, and the patterns even more recent - but we didn't learn why people are putting pennies on the benches, nor why they were arranged in patterns. (My best guesses are people paying their respects or teenagers with time on their hands.) 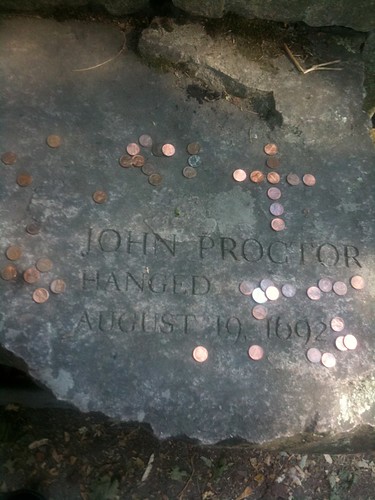 We signed up for a walking tour from Hocus Pocus Walking Tours, after some interviewing to try to ensure that the tour wasn't too gruesome or woolly-headed. (Salem has a great variety of shops, museums, and tours catering to the sort of woolly-headed New Ager who is likely to believe themselves to be a reincarnation of one of the witches burned in Salem. (The convicted witches in Salem were hanged, not burned. That's part of my snarking.))

This demanded a quick dinner from a place in the Salem mall, and it was not very good. My memory is that my crabmeat sub tasted only of mayonnaise.

The tour was pretty good, with a reasonable mix of history, witch trial details, and a few ghost stories. It dragged one murder story out across three stops, which surprised me a bit; I would expect that in three hundred years, Salem would have acquired enough interesting murders to make it unnecessary to pad out this one to fit. I forget all the names involved, but the story chronicled a young man who hired an assassin to kill a wealthy man so that his mother (the rich man's housekeeper) would inherit his fortune. Unfortunately, he bragged about his scheme in the pub where he was establishing his alibi, thus proving that egregiously stupid crime does not pay.

We finished up with ice cream from Maria's Sweet Somethings, at the recommendation of the tour guides. Ralph had the black raspberry ice cream, Lori had the snickers ice cream. It was good, but not particularly astounding. It might have been the smallest cone we got in New England. Being smaller isn't a bad thing, since most of the cones we got were too large for my taste, but the price was comparable to that of the large cones we'd gotten elsewhere. 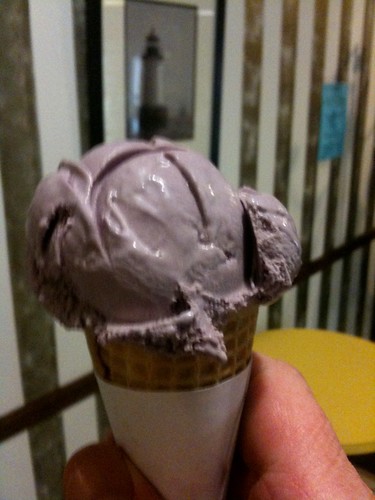 Maria's did have a great outdoor display. I had taken this photo earlier in the day. 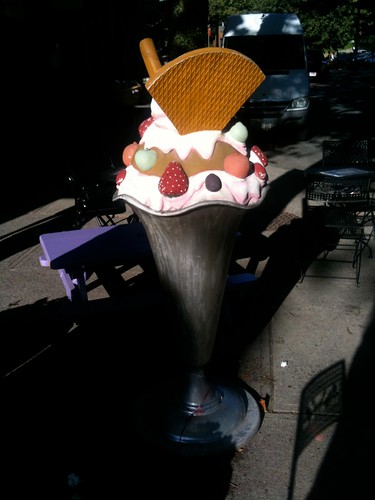 Up next: Cappy's Trackside Kitchen and Plimoth Plantation
Collapse