Our last meal of the day was at La Posta de Mesilla, in Mesilla, New Mexico. I have a particular affection for Las Posta, because it was the site of my parents' first date, and I've been there several times. The restaurant was opened in 1939, and is now operated by a great-niece of the founder. The building goes back much further, to the 1800s; I've read claims that the building has hosted Billy the Kid and Pancho Villa.

It's a very vividly decorated place, starting with the large parrot cages in the anteroom: 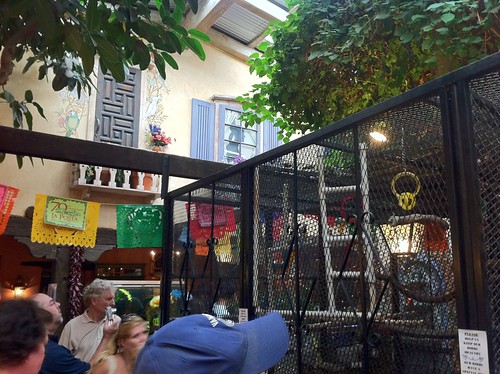 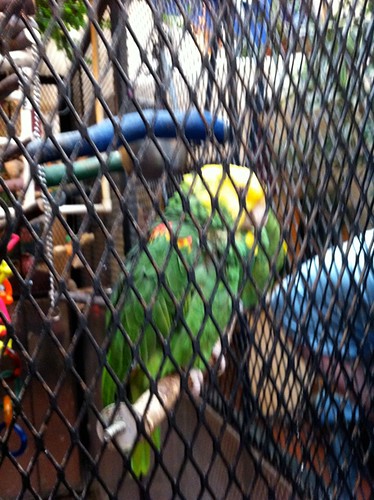 And continuing into the Lava Room where we were seated. The bags on the tables were goodie bags with flyers about La Posta, a package of red chile dip mix, a New Mexico baseball cap with an embroidered chile, a DVD about cooking with chiles from the New Mexico Department of Agriculture, and so forth. 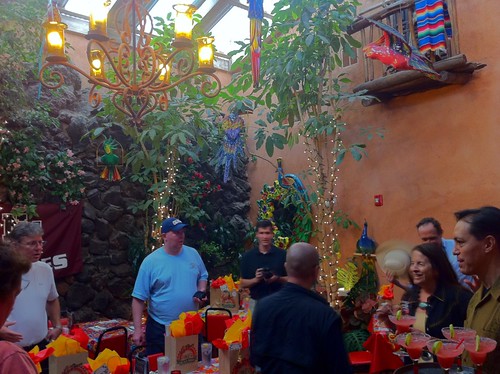 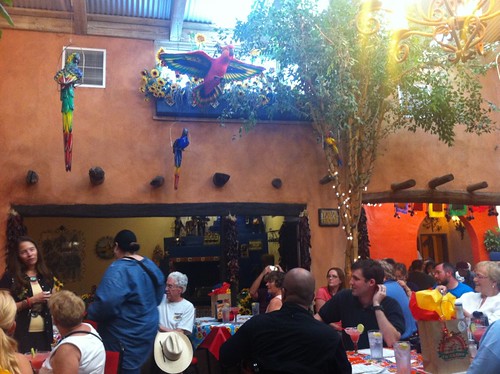 For a drink, we were given the "Chile 'Rita": "An exotic blend of "Besito Caliente" blackberry Habanero sauce, lime juice, Hornitos 100% agave tequila & Coutreau served on the rocks in a hand-blown "chile" stemglass." The heat was pretty mild in comparison to the strong sour flavors of the margarita, but there was a definite tingle on the tongue. 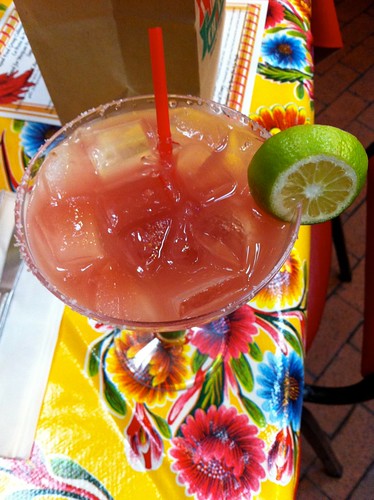 Appetizers: chips, chile con queso, guacamole, shrimp ceviche, and Mexican shrimp cocktails. I recall the guacamole being excellent, but it was overshadowed by the ceviche, which was an amazing combination of bright lime and cool shrimp. The shrimp cocktail was an unusual combination of shrimp, avocado, and tomato juice in a small glass rimmed with salt and black pepper. It was a little awkward to eat, but very tasty. 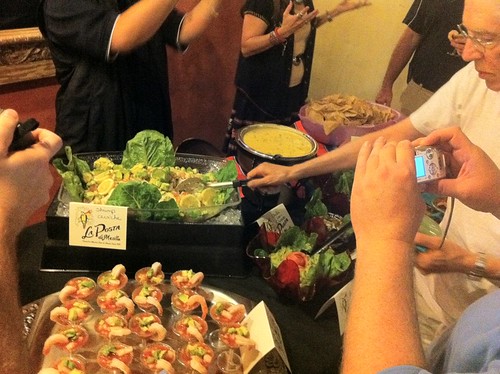 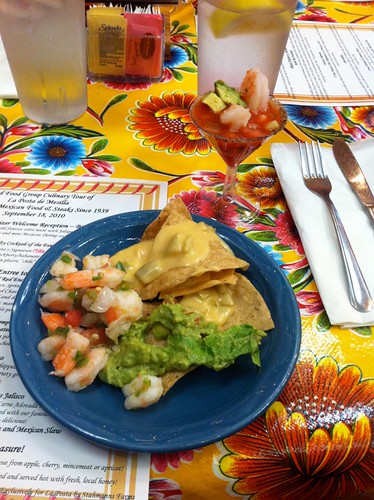 The main course was a combination platter. Clockwise from the top:
A tostada compuesta. This recipe originated at La Posta in 1939; it was a tortilla cup filled with beans, chile, and cheese.
An enchilada topped with red chile.
Carne adovada, pork stewed in red chile sauce. This was so tender that when I stuck a fork into a chunk to take a bite, the pork melted into shreds instead of coming along with the fork.
A chile relleno. This is cooked on a griddle instead of being deep-fried, and it was much less greasy than other chile rellenos I've had; the major taste was the broad rich taste of cooked chile.
In the center, then, was camotes Jalisco - delicious sweet potatoes with lots of seasoning, particularly cinnamon. 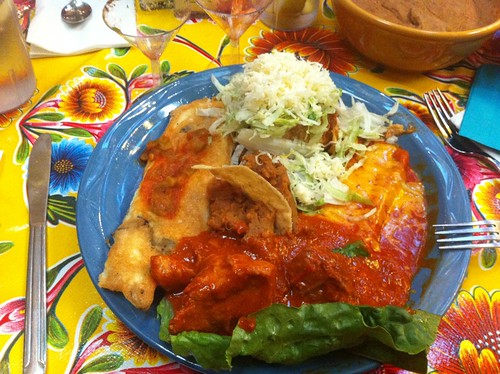 It was buffetbuster's birthday, so there was a special dessert for him. This rendered the candles I'd been carrying in my shirt pocket unnecessary. 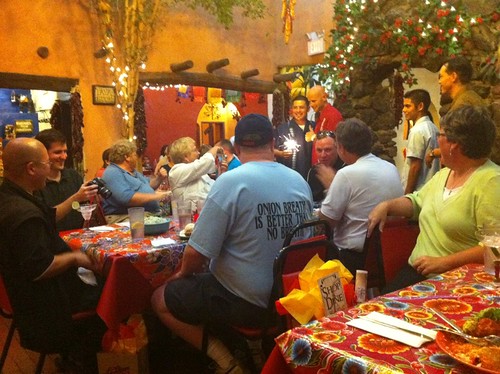 For my dessert, I had lovely sopaipillas with lots of honey. 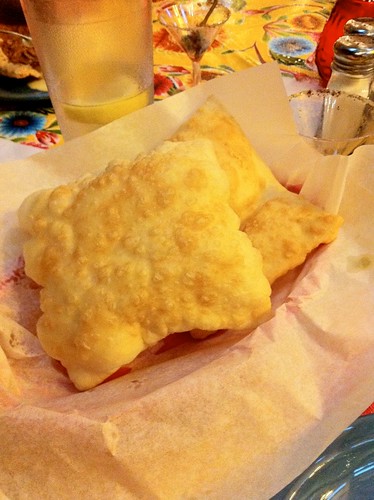 I wanted a bit of a walk to digest, so I wandered briefly through the fiesta going on at the Mesilla plaza. There was enthusiastic Mexican dancing and music going on, and a small array of vendors. I was interested by one form of fair food that was roasted corn in a cup topped with cheese and a sauce - but I had no appetite at all, and I no longer remember the name.

From there, a long drive back to Albuquerque. The DVD on this part of the drive was King Corn, about modern agribusiness and the large quantities in which corn is produced and consumed. It didn't really come to any conclusions, but I concluded that for corn production as depicted in the film, large farms are more or less inevitable - there's so little manual labor involved, and margins are so low, that amortizing the cost of the machinery over as large a field as possible is the only way producing that sort of corn makes sense. One detail that I hadn't previously thought of: single-crop farming makes it hard now for a farmer to feed their family from their farm.
Collapse