Friday morning, we sampled the waffle at the B&B, because Lori had read a recommendation praising the waffle. That was an error; the waffle was completely ordinary, and New Orleans has many excellent breakfast possibilities. (Apparently it is prohibited by local law for a B&B in New Orleans to serve a full breakfast, to preserve opportunities for the restaurants.)

But this did provide a natural opportunity to get a tour or the B&B, and that was well worth it, because I think the B&B comes as close as we've experienced to providing lodging with a Roadfood spirit. What I look for in Roadfood is good food with a distinctive local character, and Annabelle's House thoroughly provided both of those.

The equivalent of good food for a hotel is comfortable quarters and good service. Our room was very nice, with antique furniture and a beautiful silk ceiling, but the service was really outstanding in ways that really matter to us. Two strong examples:
• When we were leaving on Thursday, rain was pouring down, and the proprietor loaned us an umbrella.
• When Lori needed Diet Coke to sate her caffeine addiction, the B&B provided it to us for free, and even said that we could keep the plastic Mardi Gras cup it was served in. This probably cost them less than a dollar, and it's quite likely that they made up for it with the room rate—but it felt very special to us because we are so used to feeling nickel and dimed at every turn in a hotel.

The other side of Roadfood-ness is distinctive character, and Annabelle's House had that in spades. It was built as a mansion in the 1800s, and Cary the manager regaled us with stories about the original owners (all four of the family's daughters went to college, which was very unusual for women at that time), the process by which the mansion was moved from St. Charles Street to its current location, and the current owners. According to Cary, he current owners separated soon after their marriage, but they are so rich and their finances are so entangled together that they will never get divorced. But they're both rich, and they're both fond of collecting things.

This cabinet holds his collection of Napoleonic-era porcelain. This room also holds urns that contain her mother's ashes and the ashes of two of her dogs. 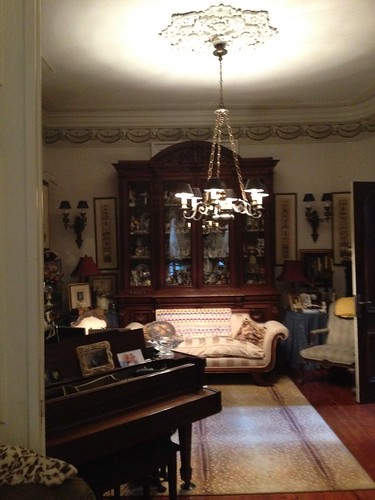 They are both very active with Carnival in New Orleans, with different krewes. The husband is in Krewe of Hermes, but the wife is a member of Krewe of Muses. We were fascinated by the collection of framed Carnival ball invitations and other regalia. 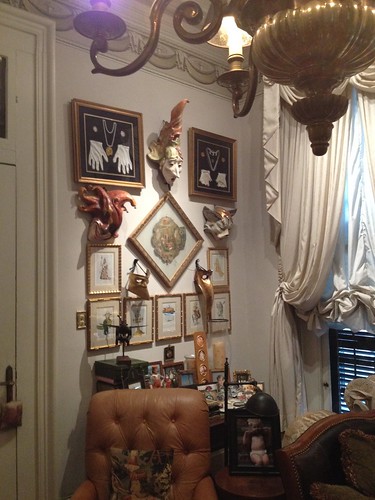 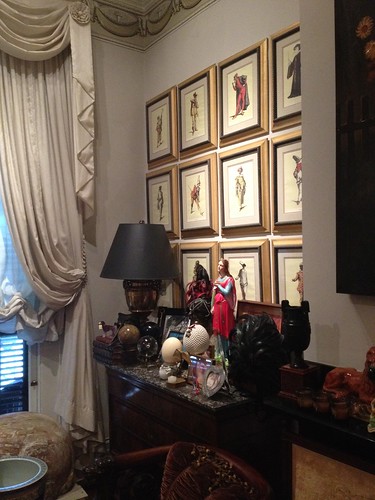 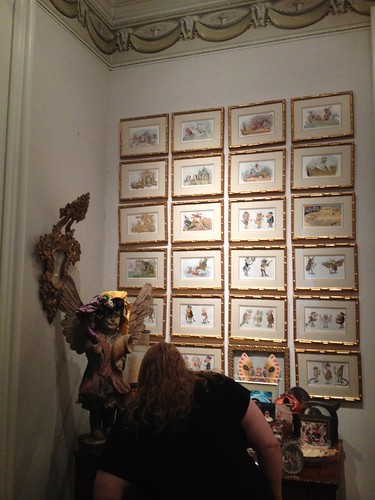 I believe the collection of trophies was his: 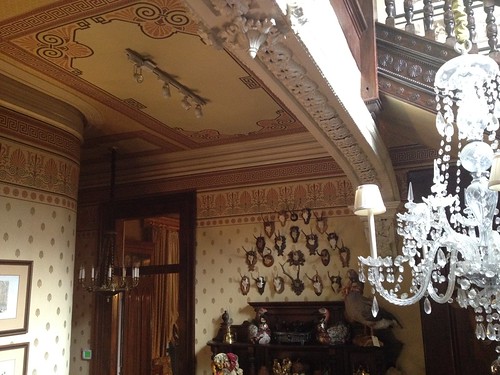 The wife had had a hobby of collecting porcelain dogs and a hobby of collecting shaving brushes. But then she combined the two. So the cabinet in the entry hallway contains a large collection of shaving brushes with porcelain handles depicting dogs. Cary said that some of the individual pieces in the collection were worth tens of thousands of dollars.

One last photo to support my claim of distinctive local character: Cary is in Krewe of Barkus (a krewe for dog owners), and he greeted us on Sunday morning in his Carnival costume: 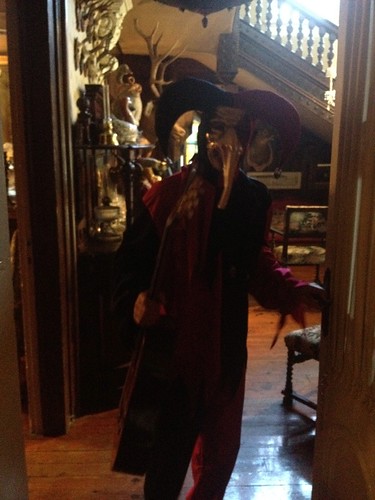 And with all this charm, the prices were lower than any prices we could find in the French Quarter. We would definitely return to Annabelle's House any time that we wanted to be in New Orleans with a car.
Collapse