(Work crunch has broken my momentum for posting these trip logs.)

Ralph: The restaurants that I think of for Kansas City tend to be low on breakfast offerings. So we asked buffetbuster, who recommended Niecie's. I had some very mixed feelings about Niecie's, because of one of their offerings that was particularly mentioned in the Roadfood review: the pig ear sandwich. On the one hand: I had never had a pig ear sandwich, and had never had an opportunity to have a renowned pig ear sandwich. On the other hand… I did not really feel eager to have a pig ear sandwich. In fact, my digestive system was feeling a bit off in a too-much-pie-not-enough-vegetables way, and I felt that a pig ear sandwich might send things further out of balance. I felt so ambivalent about this that I felt some urge to avoid Niecie's entirely. In the end, though, we went to Niecie's, and I did not order the pig ear sandwich, knowing full well that I would be telling this with a sigh. Instead, I ordered biscuits and gravy. The gravy was distinctive for having lots of crispy fried bits of sausage. (I think that this photo demonstrates that cream gravy is one of the foods that are not nearly as photogenic as they are tasty. Milkshakes fall into this category too.) Lori chose the breakfast special of pancakes, bacon, and eggs. It was all good, but the particular winner was the potent bacon. The pancakes were good, but the combination was too much for her to finish. From there, we drove north through western Iowa (significantly hillier than eastern Iowa), passing through Villisca without touring the Villisca Axe Murder House (They had signs advertising it; I guess it's a tourist destination for somebody) to Atlantic, Iowa ("The Coca-Cola Capital of Iowa") for the Farmer's Kitchen. We had met Mark and Charlene Johnson, the proprietors of the Farmer's Kitchen, at the 2011 Roadfood Festival in New Orleans, and Mark posts on the Roadfood forums. So we had contacted them ahead of time to make sure that they would be around to talk with us. We noticed the pie list early on with anticipation. Mark suggested the fried pickles as an appetizer. These were the first fried pickle spears that I have had for which the batter clung closely to the pickle. (Usually the batter forms a hollow shell and the pickle slides loose inside. Onion rings are prone to the same problem.) We passed on the award-winning chili because it was a ferociously hot day.

I chose the breaded pork tenderloin sandwich. It was very different from the broad, gentle pork tenderloin at Gray Brother's Cafeteria; this was much thicker, with a more rugged, sturdy flavor. I had previously tried the Farmer's Kitchen breaded tenderloin at the New Orleans Roadfood Festival; it was much better in its native habitat. I should have asked about the pickle slices, because they were not typical dill pickles; they had a somewhat lighter flavor and a different mix of seasonings.
As a side, I ordered a fruit cup. It may not be the specialty of the house, but it served my uncertain-feeling digestion. It was actually really delicious, clearly not a simple canned fruit cocktail. The pineapple was probably not local, but the watermelon probably was. Lori ordered a hot roast beef sandwich. (A beef sandwich sandwich covered with gravy carries many names in different places, but in the Farmer's Kitchen, it has the name that was familiar to me.) It was very good, but a bit too warm for the weather; even though the building was air conditioned, the heat snuck in through cracks to make itself impossible to ignore. The entrees, though, were just a precursor to the main event: the pies. I was particularly keen to try out the Midwest specialty of sour cream raisin pie. I had spoken with Charlene before about sour cream raisin pie, but I had not previously had a chance to try it; they brought no pie to the New Orleans Roadfood Festival. Mark had posted their recipe on the Roadfood forums, and I had made it once myself - but what I had made might have been as inauthentic as the tacos from Haus der Taco.
Because of that history, my first emotion when I tasted the custard was relief, because the wine-y mellow flavor was very much like what I had made. But even though my filling may be comparable, I still have a ways to go to match Charlene's pies: my meringues do not compare to the tall jaunty meringue of this pie. And the crust of this pie was of a superb quality that it's hard for me to equal. I am of the opinion that pie crust is one of the foods that varies most in the quality with which it is served in restaurants. It's rare for a hamburger or a piece of cake to be worse than "mediocre", but a restaurant will serve a pie whose crust is pasty, crumbly, gummy, hard, rubbery, or tough with nary a blush of shame. (It is for this reason that I think it is safer to order cake than pie in a mediocre restaurant.) But this crust was far above all that: it achieved the pie-crust ideal of being both flaky and tender. Perhaps if I practiced making multiple pie crusts a day for several years as Charlene has, my pie crusts would reach that level. Lori had the peanut butter chocolate explosion pie. Charlene told us the story of the name: at the 2009 American Pie Championship (where this pie won a blue ribbon), Charlene was unfamiliar with the commercial mixer she was provided, which was much more powerful than the mixer she was used to… and at this point I think this story is best concluded with an ominous ellipsis.
Whatever may have happened behind the scenes, this pie was light and creamy, and Lori declared this the new standard by which she would enjoy peanut butter pie. 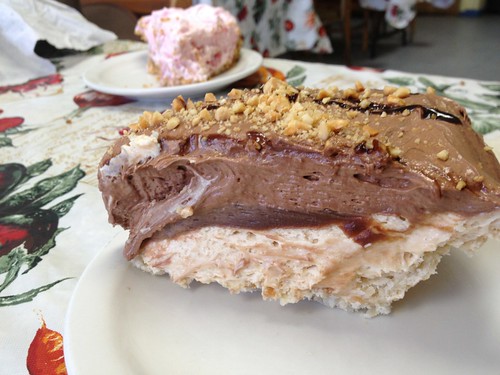 There were far more attractive pies on the list than we could consider eating, but both aversion and buffetbuster had spoken well of the watermelon pie. This was a graham cracker crust with chunks of cool, flavorful watermelon suspended in a mixture of jello and whipped topping. It was a delicious cool treat for a scorching day.
It struck me as a distant cousin of the strawberry pretzel salad that I learned about after moving to Pennsylvania. In retrospect, though, this is an odd comparison for me to make, because I have never actually had strawberry pretzel salad. Mark and Charlene left us with one more slice of pie for the road, a piece of caramel apple pie. I prefer my apple pie to be tender almost to the point of squishability, but this pie had firm distinct chunks of apple.

As we left, we saw the Farmer's Kitchen had put up a sign that emphasized the heat wave: "We are closed due to heat" We were amused by the knitted cozy to keep the lid of the chamberpot from clanking. Although Lori knits, she has no plans to make such a cover herself. But the docent said that her grandmother had been delighted when such "silencers" came. The docent mentioned a theory that quilts had been used to convey codes about the Underground Railroad. Unfortunately, that theory is in dispute; there appears to be no evidence of the practice from earlier than 1980. Every mention of the Hancock House that we saw mentioned that it had a secret cellar where fugitive slaves had been hidden. Unfortunately, the house does not have the shelves which hid the the entrance to the cellar, so at this moment, the secret cellar is about as well-concealed as our laundry room. The docent said that safety regulations had required them to remove the shelves, but I would really have liked to see at least a model of the shelves to judge for myself how difficult the secret cellar would be to find. In downtown Walnut, Iowa, we noticed a large assortment of antique stores. Most of them had just closed when we came through, but Esther's Antiques held off on closing while we looked around. It was really quite a nice antique store, with nice merchandise at good prices. (Which is rare; it's far more common to see tatty stuff at high prices.) Esther and her husband Sheldon were very pleasant to talk with. When I went outside to sit and wait for Lori, Sheldon and I got into a long conversation about my iPad and related devices. He had bought a Blackberry Playbook (proving by example that there is a market for the Playbook) and didn't say much about his own use of it, but he said that Esther uses her iPod touch extensively. Our dinner plans for that night were to visit Archie's Waeside, which both Roadfood and Lisa Lee had recommended in the most glowing terms. Lori wondered if we should call ahead for a reservation, so I looked up the website for the phone number—only to discover that the website said that Archie's Waeside was closed for vacation through July 23. Well, fooey. So we stopped off at a rest stop to replay, because 3G reception is spotty on Iowa's highways, but Iowa's modern rest stops have WiFi. After some pondering about other options, I concluded that I had been anticipating steak. And the Tea Steak House was just across the border into South Dakota, and they served the South Dakota regional specialty of chislic. So we rerouted towards Tea, arriving just at sundown.

According to my reading, chislic is always deep-fried meat, but the meat and the preparation may vary. At the Tea Steak House, it's beef, deep-fried without batter, and served with barbecue sauce and a shaker of garlic salt, with a single toothpick as a utensil. It was quite tasty, though it came out done past medium rare.

For a second time that day, we heard a Roadfood call and did not answer it: as we were asking the waitress about her recommendations for chislic, the couple eating at the next table overheard us and offered their own suggestion: according to them, the thing to do is to go to one of the little bars across the street, order an order of lamb chislic to go, and eat it with lots of garlic salt. This was clearly a Roadfood call, the sort of local recommendation that we're delighted to hear, but though we heard the call, we could not answer it; by the time we finished our steaks, we were too full to feel any appetite for lamb chislic. I ordered the small T-bone steak because I didn't have much appetite and I'm glad I did: even the small steak mostly filled a dinner plate. This was a great steak, with a brawny, savory flavor. It had a fair bit of fat and gristle, but it was so large that I could just eat the good bits and be very full. I ordered the hash browns because they were recommended by the Roadfood review for soaking up the juice. When the waitress asked if I wanted the hash browns with cheese and onions, I said yes. I didn't care much for the cheese itself, and it interfered a bit with the hash browns' ability to soak up juice. Lori prefers a more tender steak, so she chose the filet mignon. It was a good steak, but it was very rare, much rarer than the medium rare that we had ordered. Much as we liked the Tea Steak House, I must acknowledge that they did seem to have trouble with temperature control. Time-lapse video of the drive from Kansas City to Atlantic:
...
Collapse