Breakfast at Stout's Island was an ordinary continental breakfast. We had been looking forward to the banana bread at breakfast, but it was not to be found.

We did take more pictures, because this was probably the most scenic spot we'd visited on the trip: 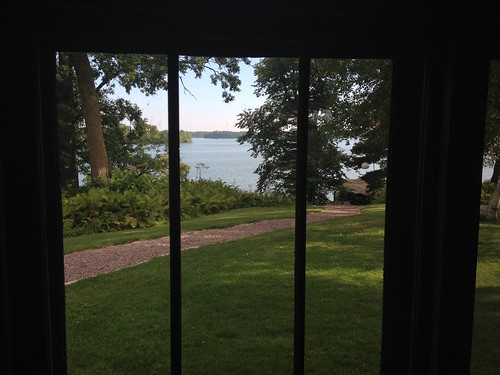 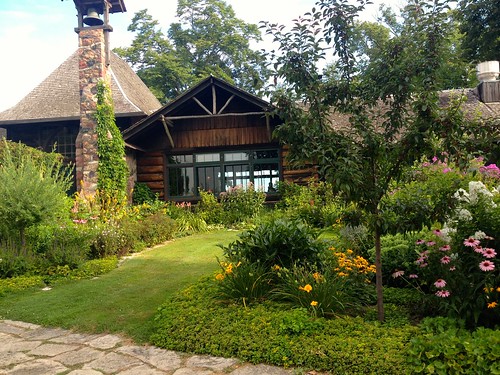 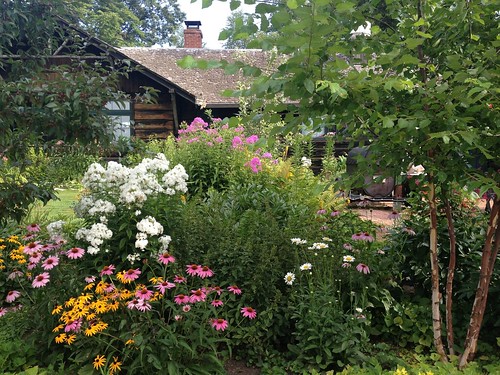 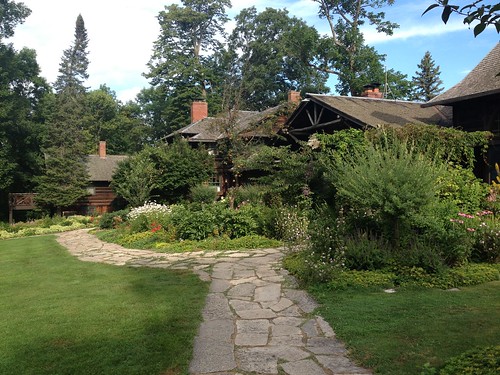 I really admired how the trees were arranged to give shade to the deck chairs morning and afternoon without obstructing the view. 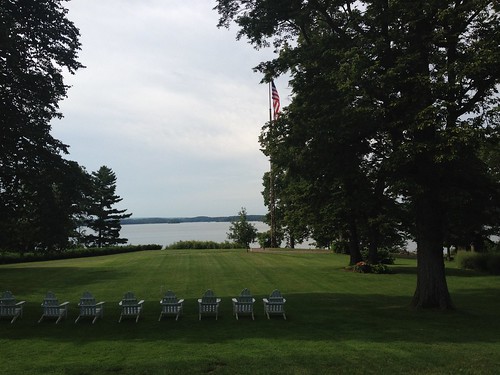 Because Lori had been denied so many shopping opportunities the day before, we sought out a yarn store for her. I suggested "Elly's Sheared Sheep" knowing only the name. We figured that it would be a little yarn store added on to a farm, where the wool came from sheep sheared on site. We were wrong: Elly's was in downtown Chetek, a town of about 2,000 people.

While Lori pored through Elly's, I looked through the Chetek Bakery. It seemed to have interesting possibilities for things not found elsewhere. For example, it had lefse, a Norwegian flatbread - but the young woman behind the counter said it really ought to be eaten warm with plenty of butter, and that was beyond what the bakery could do. 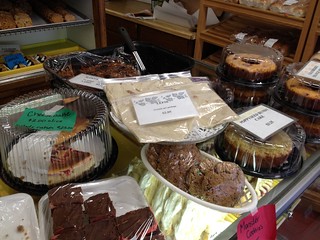 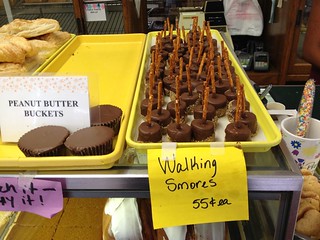 They had one item that piqued my curiosity: a donut/pastry called a "Persian". My memory and notes don't give me all the details, but I recall that I was told that its icing included maple and perhaps also cinnamon. No one in the bakery could tell me why it was called a Persian, and I couldn't get a clear answer of how much of a regional food it was. My later web-searching has indicated that the Persian is a specialty of Thunder Bay, Ontario, and the name is a corruption of General John Pershing. I now wish I had tried one.

Instead, I got a kolache to compare Wisconsin kolaches with Texas kolaches, and a cake pop for Lori. Both were fairly undistinguished.

Our next stop was once more following in buffetbuster's footsteps: Sand Creek Cafe, in the little town of Sand Creek, Wisconsin. We had a lot of trouble finding the place. Tomtom took down a dirt road that turned into a dead end, and when we went back to paved roads, it suggested that we should turn headfirst into a cornfield. Google Maps claimed that we had arrived when there was nothing nearby but a horse ranch. We decided that Plan C would be our last attempt: we called the restaurant and asked for directions. Unfortunately, we didn't know quite how to describe our own location, and we didn't know the geography around, so it was hard to get good directions - and in fact, the lady who talked with us claimed the cafe was at a different intersection than it actually was. But I played a hunch and found the place a few blocks away. 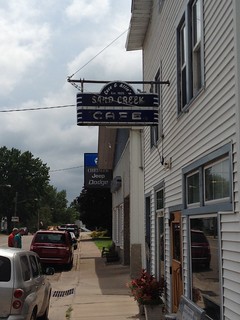 The trophy in the upper left corner shows a different end of the deer than is usually mounted. 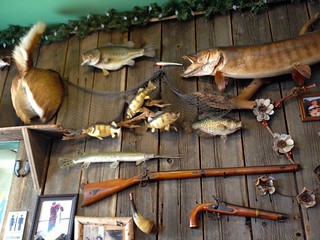 We noticed that the menu showed the password for the cafe's WiFi network. It's not something I was expecting, but it makes sense: in a small town, a cafe may be the social center of the community, and for folks who are isolated by occupation but not by choice, Internet access may matter a whole lot - a WiFi network in a cafe may be the 2012 equivalent of a stack of shared newspapers. 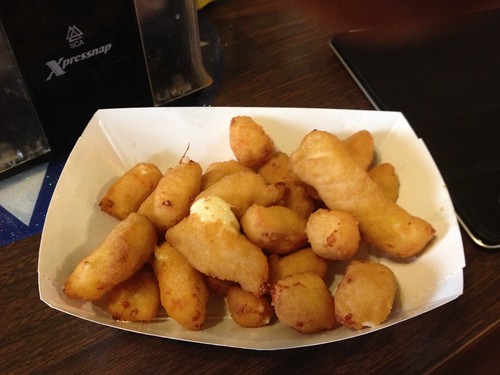 Lori got spaghetti because it was the special of the day. 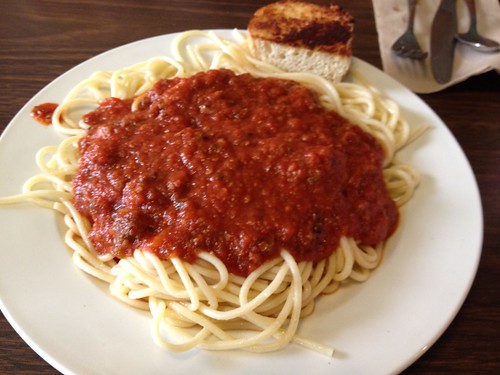 I got the fried chicken wings; they were really delicious, very tasty and savory. 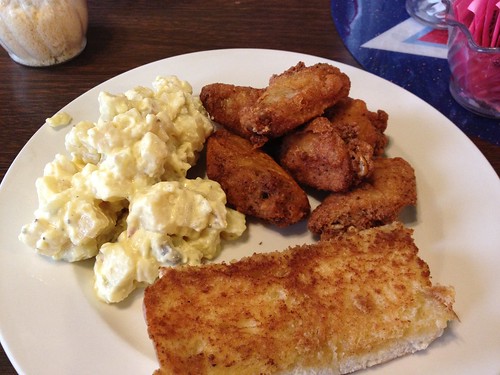 Unfortunately, the service we received was somewhere between "indifferent" and "frosty". Our waitress was slow to visit us and utterly unmoved by our attempts to make friendly conversation. When we had finished our meals, she was sitting with other staff eating her own lunch. We asked about the pie that was mentioned on one of the signboards, and she snapped, "no pie today". We would have gotten one of the milkshakes praised in the Roadfood review, but her surly disinterest made us unwilling to try to get her attention again. Bleah. I still snarl a bit when I think of how frozen out we felt. Perhaps our navigational difficulties caused us to arrive at the worst possible time.

We drove down to Milwaukee to meet up with Roadfooders. One particular conclusion of this drive: Wisconsin farms look like my mental image of farmland. When I think of farms, I imagine a red barn, green pastures, a few trees on the edge, and so forth - and Wisconsin farms come far closer to that pastoral image than farms in Illinois or Iowa or Minnesota.

We managed to make up some time on the drive, and I was anticipating being right on time - but there was construction on the street, and we didn't realize that we needed to turn through the construction barrels to get into the parking lot until we circled around and followed someone else doing the same thing. But at least we were more on time than we had been in Chicago.

The meal at Polonez was definitely one of the best meals of our trip, both for the food and for the company. We felt really touched that so many people came out to eat with us, and the conversation was great. (And the restaurant was quiet enough that I could hear folks all the way to the other end of the table, which is harder to achieve than I would like.) We thank our hosts very much for choosing Polonez. (clockwise from left: Lori, X1, Susan, BuddyRoadhouse, cjucoder, abe_froeman, Mr Maki.) 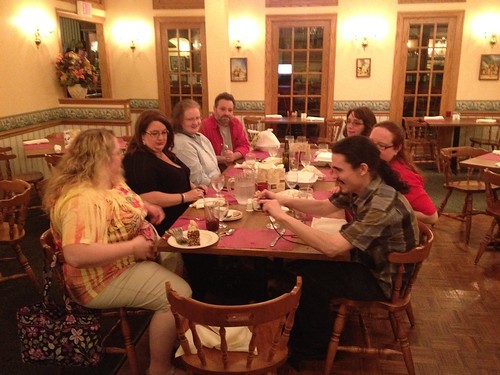 The deviled eggs had a zingy horseradish taste. 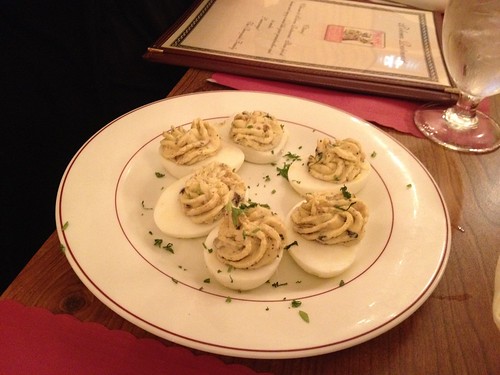 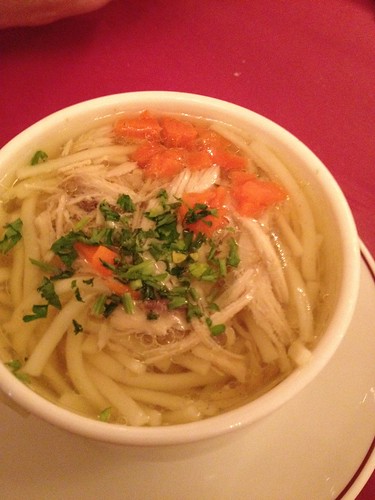 As we were perusing the menu, X1 asked whether any of us dared try the czernina (duck's blood soup). I was in better fettle than I had been the past few days, and perhaps I was still regretting passing up the pig ear sandwich. But I had had czernina within the previous month, so I took the her dare in spirit if not in letter by ordering the tripe soup. I admit that I was suspicious of tripe soup; I don't eat much offal, and I've only previously encountered tripe in a bad menudo experience in Kingsville. But I was ordering plenty of other food; the only risk was that it would be nasty and I would waste all but a bite.
The tripe soup was incredibly delicious. I was amazed beyond all expectations. It was like a hearty thick-noodle chicken soup - the way I like chicken soup - except that the "noodles" were a bit spongy and the broth was far more rich and flavorful than the best chicken soup I've had. This was definitely one of the best dishes I had on the whole trip, and if we were in Milwaukee again, I would make it a point to return to Polonez for more of the tripe soup.
All the glowing praises I have said about the tripe soup are true, and I hesitate to say anything that might taint my reputation for probity and plain dealing. But I must admit that I take a certain mischievous pleasure in the thought that I could be lying now, and none could gainsay me; despite my praises and my offers to share a soup I would rather have kept to myself, no one else at the table chose to sample the tripe soup. 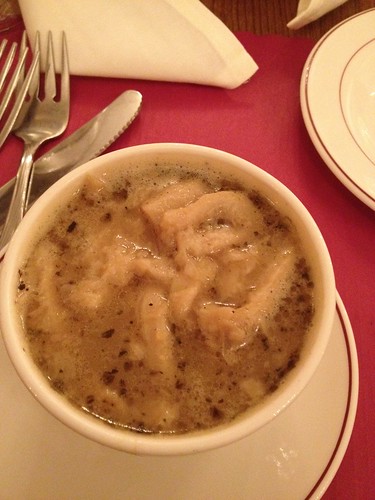 I ordered the Polish plate with a selection of mixed pierogi, potato pancake, kielbasa, and sauerkraut. I was surprised again, because the item on the plate that impressed me the most was the stuffed cabbage. I've had stuffed cabbage often around Pittsburgh, and they are usually a perfect example of layersquish; cutting through the cabbage wrapping squishes out the filling so that by the time I've taken one bite, the plate is just a forlorn and empty leaf amid a wasteland of scattered filling. But the stuffed cabbage from Polonez completely avoided layersquish; my knife glided through the cabbage and the meat held firm, so every bite easily combined cabbage and filling in a delicious combination. 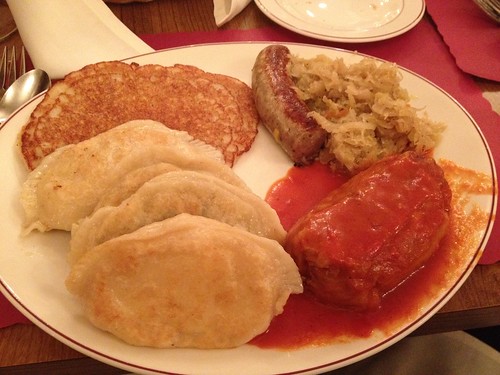 I also got an order of Bigos, because I've had it only occasionally in Pittsburgh. Bigos is a stew of meat and sauerkraut. It was very tasty, but it left me feeling that I had too much sauerkraut in front of me. 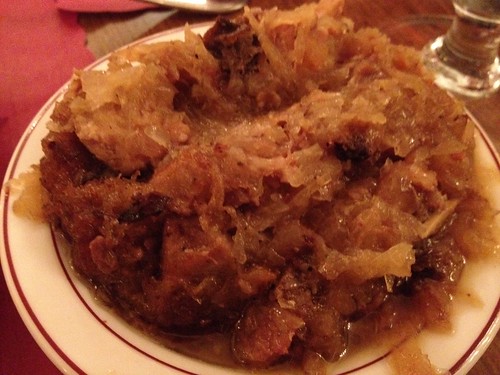 Lori got some delicious potato dumplings filled with ground beef and onion. 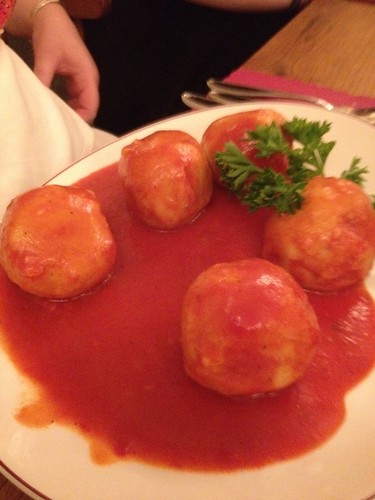 For a dessert, Lori ordered a slice of the Polish torte to share. This was a walnut spice cake layered with buttercream frosting and walnuts. 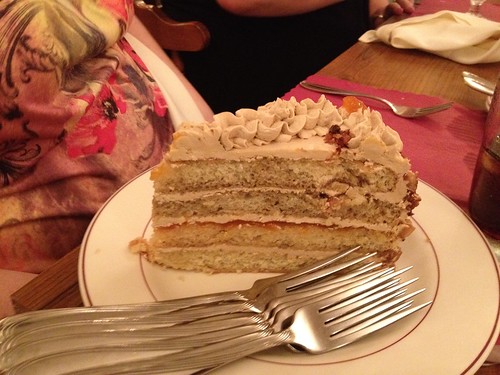 From there, the Roadhouse clan accompanied us to Kopp's for frozen custard. There's something special about the row of white cow statues at night. 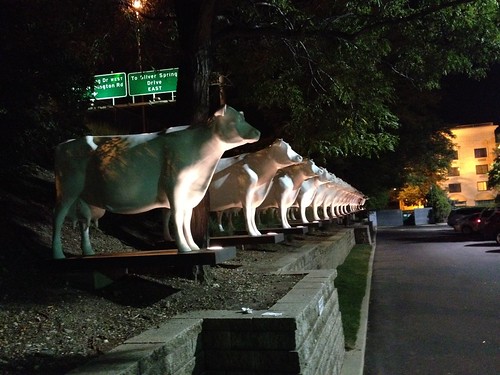 I passed on the frozen custard, because I was very full from Polonez and I'm not a big fan of frozen custard. But the chocolate truffle custard was so very good that it made me regret my choice. And it was extraordinarily pleasant to sit outside chatting with the Roadhouse folks and enjoying frozen custard as a hot day was just beginning to cool. 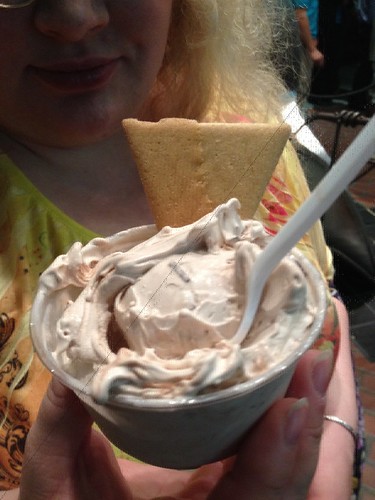 But I had one more place I wanted to visit in Milwaukee that night: The Safe House. I had previously visited the Safe House on a trip to GenCon in 1997, and I remembered it as a dazzling spy-themed bar filled with marvelous gadgets. But this visit was a big disappointment.

The best part of the Safe House might have been the process of getting in. Abe_froeman and Mr. Maki passed in without incident. Lori half-remembered the passphrase and was allowed past with a correction. I got a stern warning for whispering too loudly. BuddyRoadhouse and Susan, though, couldn't remember the passphrase and had to prove their dedication to the cause by acting like monkeys on closed-circuit TV. (The fierce demeanor of the woman guarding the entry led to this conversation on the inside: BuddyRoadhouse: "I bet that woman at the door has another profession that involves wearing a lot of black, if you know what I mean." Ralph, feigning innocence: "You mean she's a nun?")

Inside, though, it was far too noisy and crowded for any conversation. And the selection of gadgets and gimmicks seemed paltry and unimpressive compared to, say, the two-way radio with a miniaturized camera that I was carrying in my pocket. I felt very glad that I had paid the cover charge for everyone. I'm sure the Roadhouse clan would have been good sports about the cover charge, just as they were good sports about everything else - but I'd rather not give people too much to be good sports about. 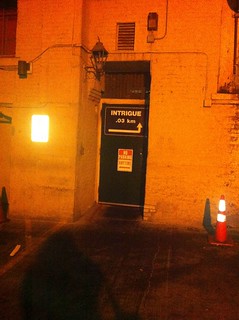 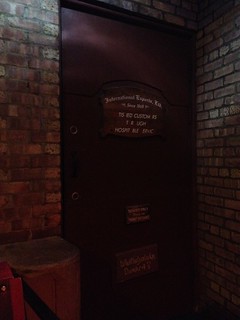 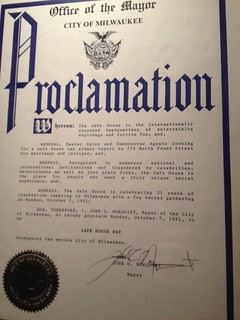 Time-lapse video of our drive through Wisconsin (look for the pause as we get lost on the way to Sand Creek):
Collapse