We started the day late. There is much that I have not yet figured out about traveling successfully, but one of the things I have learned is the necessity of recovery time and unscheduled time. Lori had slept very poorly the night before we left, and although my parents have improved their guest accommodations from the days of their foldout sofa, the late arrival meant that there was no way for us to get great sleep. And we had quite a lot scheduled ahead, so it was right to have some blank time then.

We returned to Kerbey Lane for brunch, because Adam had previously praised their pancakes and given us their pancake mix. (The package claims "If all the pancakes made by Kerbey Lane in one year were lined up along the equator, it would be a tremendous waste of good pancakes.") We sat on the porch this time, because we felt keenly that it was a lovely day to sit outside and that such days were rare - it was too cool for outdoor dining back in Pittsburgh, and very likely to be too hot very soon in Austin.

Mimosas were really cheap. The champagne was very dry, but a breakfast cocktail really makes us feel that vacation has begun.

Lori's pancakes were every bit as good as she had anticipated. They were light and fluffy, and they tasted of cinnamon and vanilla. They may not have quite won Lori's heart away from the pancakes at the Camellia Grill, but there is no shame at all at coming in second to those. 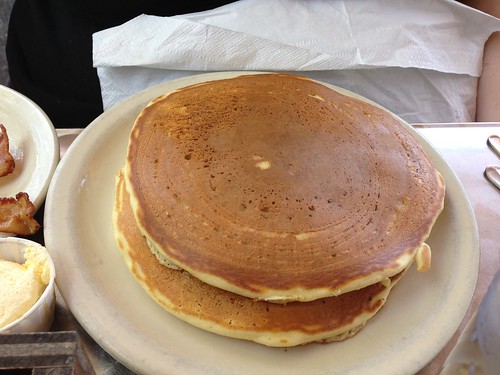 Her bacon was great, too, with a very hearty flavor. Her fruit cup was not so good, but we cherish the good things and leave behind the bad. 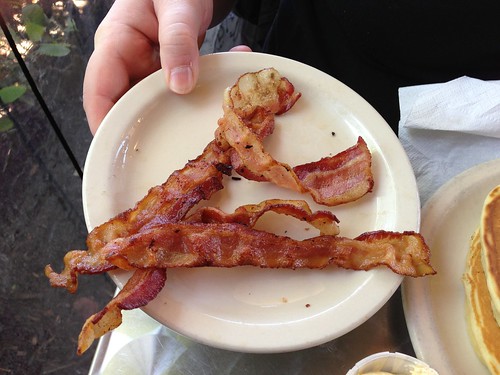 I ordered my first migas in Austin. (Lori: "What's migas?" Ralph:"It's like Tex-Mex matzo brei." L: "What's matzo brei?" R: "It's like Jewish migas." I then gave a more helpful explanation: migas is scrambled eggs with tortilla chips and stuff.) I hadn't planned out our breakfasts, and I wasn't sure that we'd get migas or breakfast tacos another day, so I ordered my migas in taco form. I included queso at the waiter's recommendation. These migas tacos were delicious. There was lots of flavor from the queso, onions, and peppers, and nice crunch from the tortilla chips. 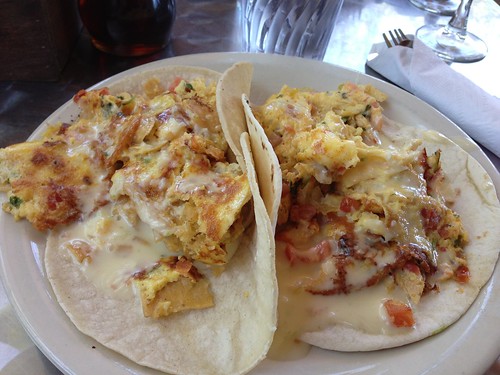 The other reason that it worked out well to go to Kerbey Lane Cafe was that it shared a parking lot with our next destination: the Art on 5th Gallery and its Hats Off to Dr. Seuss exhibit. I had noticed the Dr. Seuss exhibit in some of the tourist material in the hotel room, and though I was intrigued, I didn't mention it to Lori try to put it on our schedule. But Lori saw it and was eager to go. And I'm very glad that she did, because we really enjoyed the exhibit.

We learned that Dr. Seuss had a great enthusiasm for hats. There was a large trunk full of fantastic hats he had owned, many of which served as models for the hats in The Five Hundred Hats of Bartholemew Cubbins. He would apparently have dinner parties featuring outlandish hats; a quote on the wall talked about how it really loosened up a formal dinner once everyone was wearing a silly hat. We weren't allowed to take pictures of the hats, but we were given permission to take pictures of the paintings. 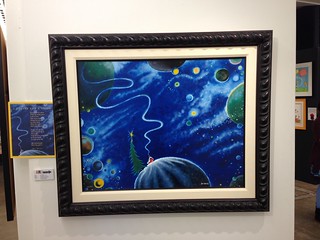 "Freebird" really delights both of us. I would consider hanging it on our wall - but I hesitate a bit because Dr. Seuss has some childish associations as well as childlike associations. 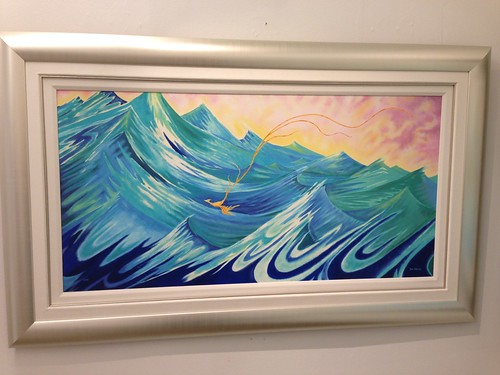 We learned that Dr. Seuss was into fanciful taxidermy as well: 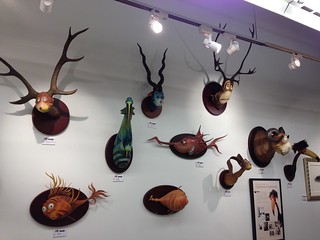 Another thing learned: I had no idea that Dr. Seuss had painted so many nudie pics. And here's the thing: his nudie pics look almost exactly like what you would imagine if you tried to imagine nudes painted by Dr. Seuss. For example, this is Dr. Seuss's "The Abduction of the Sabine Women". I think the expressions of the animals on the right are the best part. (With some clicking through to Flickr, you can see larger-resolution versions.) 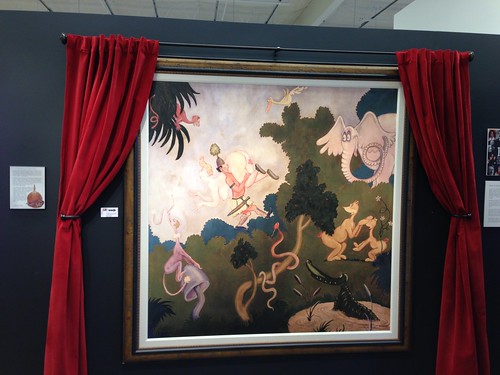 Lori loves "O Solo Meow" a bit more than I do.

I make up for it with my deep affection for "Cat from the Wrong Side of the Tracks." 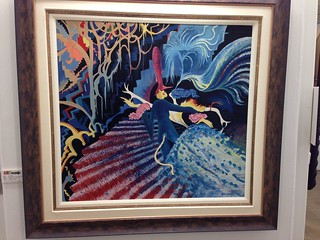 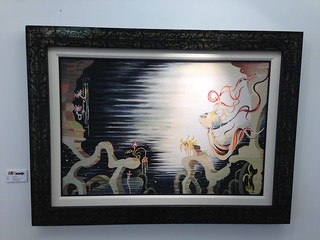 Once we were done with the Dr. Seuss exhibit, we went to see the tourist sites at the Texas State Capitol. As a segue, I offer one last Dr. Seuss image: 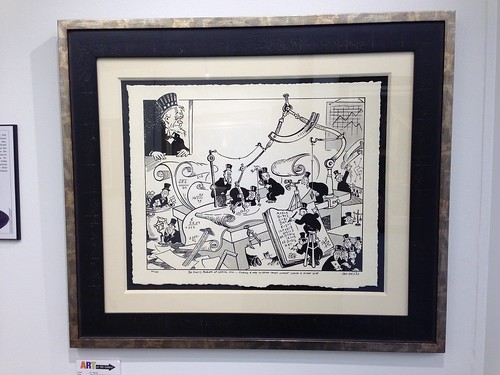 The caption is "The Knotty Problem of Capitol Hill… Finding a Way to Raise Taxes Without Losing a Single Vote."

Texas does have a good-looking capitol, especially on a beautiful cloudless day.

We looked at the exhibits in the visitor's center, walked through the capitol briefly, then ambled down to 6th Street, which is densely packed with clubs and bars. I love this of the gold boots dangling from the power line as a symbol of 6th Street, although the picture didn't turn out as well as I'd hoped.

We did not tour the Museum of the Weird, because Lori feared being grossed out. We did, however, spend quite a bit of time touring Hatbox, an exceptional haberdashery on Sixth Street. I had been very partial to the Man's Hat Shop in Albuquerque as my hat shop of choice, but Hatbox may be even finer. And it was particularly nice to visit with Adam, who is even more of a hat-wearer than I am. I am notable for my hat-wearing by the standards of the early twenty-first century; I wear a wool felt hat all winter and a canvas hat all summer, except for the rare occasion where my top hat is called for. But Adam has a whole tonsorial wardrobe; we saw him five times on this visit, and he wore a different hat each time. 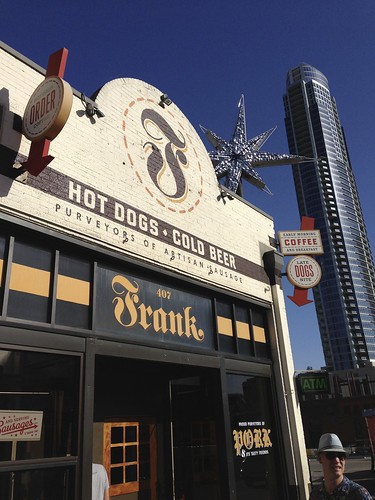 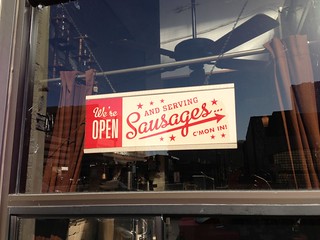 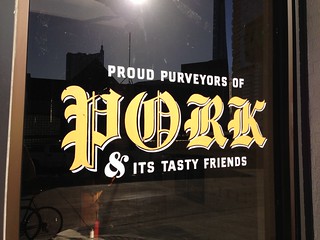 I ordered one of the specials, the "mini sausage flight" of three of their featured sausages. (I was very attracted to the chance to try many different dishes, but I admit, calling it a "flight" instead of a "sampler" raises my hackles a bit.) From left to right, with descriptions copied from the menu:
Jackalope: "Our custom-made smoked antelope, rabbit, and pork sausage, cranberry compote, sriracha aioli, cheddar"
Texalina: "Our custom-made smoked pork and beef sausage, grilled horseradish coleslaw, Carolina mustard BBQ sauce, white cheddar"
The Notorious P.I.G.: "Our custom-made smoked pork, bacon, jalapeno, sage sausage topped with mac n’ cheese, Dr. Doppelgänger BBQ sauce"
I liked the variety, but none of these sausages really delighted me. The cranberry compote in the Jackalope overwhelmed its other flavors, and the Notorious P.I.G. had a very spicy sausage that clashed with the messy mac and cheese. The Texalina had my favorite sausage of the three, but also had too much going on. 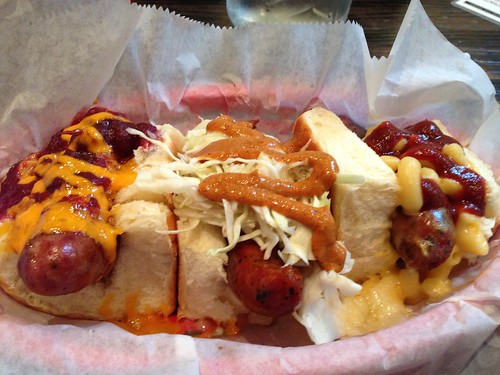 I much preferred the delicious corn cup ("Grilled corn served off the cob with chili mayonesa, lime juice, cilantro, and cotija cheese"). This is a combination of flavors that I've seen served elsewhere, and I suspect that being tumbled in the collective experience of hundreds of cooks has smoothed away the rough edges of this recipe in a way that the house-specialty sausage recipes have not been polished. 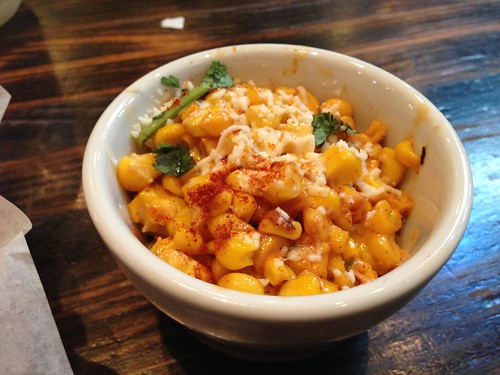 I also quite liked Lori's choice, a plain dog with grilled onions and cheese, on a pretzel roll. 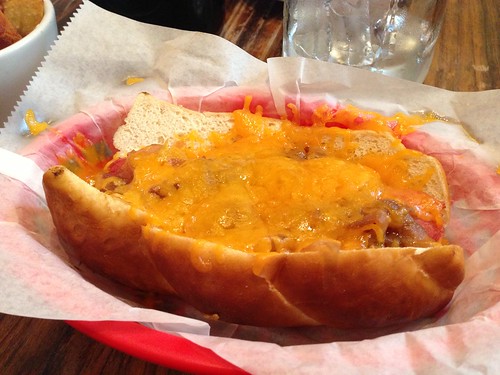 But though Lori's hot dog beat mine, her side did not. The Campfire Hash was described as "Griddle-cooked Yukon Gold potatoes, sliced 100% Vienna Beef Frankfurter, diced peppers, and onions", but it just tasted like undistinguished home fries. 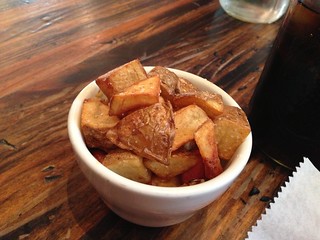 For dessert, we shared the bananas Foster. Bananas Foster is one of those dishes that I love in concept but am often disappointed by in practice. (Haluski is another example.) In the case of bananas Foster, I think that the discrepancy is because the first bananas Foster I had was extraordinarily delicious, and I have formed my opinions of bananas Foster as if that were the average. This dessert at Frank had a nice flavor, and the flavor went very nicely with Amy's Mexican vanilla ice cream. But there was so much cinnamon in the sauce that it ended up with an unpleasant gritty texture. 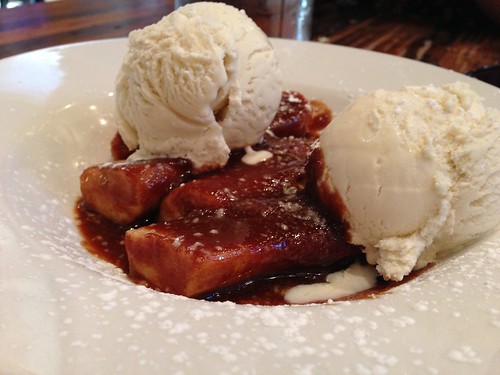 Overall, I enjoyed Frank, but I found it spotty - I suspect that if I went regularly, I'd figure out the dishes that worked and converge on a very specific order that dodged the misfires.

We ambled back to Sixth Street and looked through the beautiful Driskill Hotel. 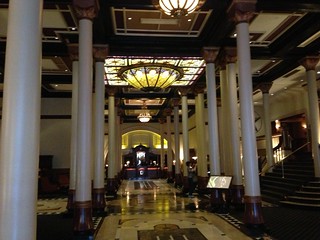 The Driskill was the starting point for a special treat for Lori: a horse-drawn carriage tour. We'd planned for a sunset tour along the lake, but we were told that a festival had blocked off all the paths to the lake, and we were offered a tour of historic homes instead. I've forgotten almost everything our driver said about the homes, but I remember more about what she said about herself. She had grown up with horses, and she had been a part of the NCAA Equestrian team at Texas A&M. But she had learned that being a professional horse trainer was not for her. (She said this in a way that made us infer that there was some specific event that led her to this conclusion and also infer that it would be intrusive to inquire.) So she moved to Austin and was driving a carriage to pay the bills while she tried to get into a job in screenwriting. I wish her every luck. 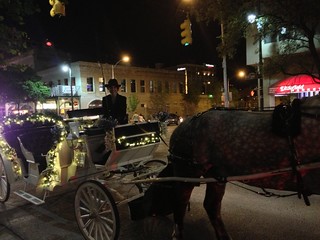 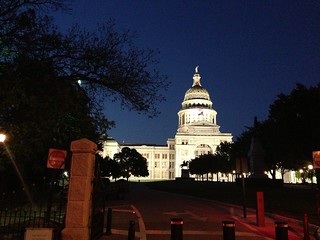 After our tour, we wanted to cap off the evening with ice cream. And I'd read of an artisan ice cream place that piqued our interest: Lick Ice Creams 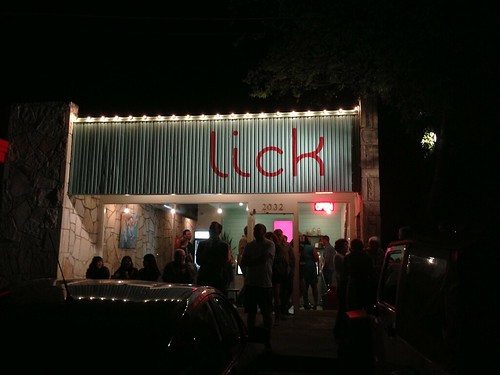 I sampled the caramelized carrots and tarragon ice cream because of the novelty, and I was surprised by how good it was; it had a very sweet and earthy flavor, even sweeter and less carroty than glazed carrots. I don't know that I could correctly identify that flavor from tasting it, even after already tasting it once.
The flavor on top is strawberries and cream, which I ordered without tasting. Perhaps I should have tasted it before ordering; it tasted like sweet cream ice cream with just a touch of strawberry. Still good, certainly, but I prefer a lot more strawberry taste.