We had a special dinner planned, and it ended up being not just special, but utterly outstanding.

Our dinner destination was Royer's Round Top Cafe in Round Top, Texas (population 90 according to the sign at the town limits). 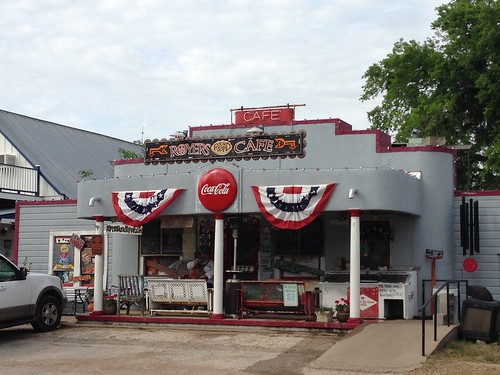 If you look closely at the picture, you may notice what we noticed when we got to the porch: Bud Royer was sitting outside. (I don't think you can look closely enough at the picture to make out the sign on the beer cooler: "Beer on the honor system. Lawyers and bankers pay cash." We recognized Bud from meeting him at the New Orleans Roadfood Festival in 2010. Chris was the first to introduce himself and shake Bud's hand. And Chris's explaining that he was a senior writer for Roadfood.com may have contributed to the feast we were about to have.

Chris said that we were five for dinner, but I corrected that to seven. In retrospect, I should have called to book a table in advance, because the cafe does not have that many tables. But they had a large table open right next to the door.

As we were ordering iced tea and lemonade, the door opened, and in walked Steve Koenigsberg. I wasn't surprised; I had been receiving text messages about his progress, under the name "Mystery Guest". (I had renamed his entry in my phone, in case I had to ask Lori to read my texts while I was driving.) I had been trying to surprise Chris and Amy - but Chris said that he has met Steve in enough unexpected places that no encounter with Steve surprised him anymore.

Steve was accompanied by Cara, a professional colleague of his. I hope that he will chime in, because this is really his story to tell. But it's something like this: he and Cara had been together at a recruiting fair in Houston, and he had offered to give her a ride back to Austin. When the fair had ended, there was just enough time for him to join us at dinner. He feared that Cara might prefer to spend time with her colleagues in Houston, but when he suggested that they drive an hour and a half for dinner in a tiny town in Texas ("Round Top? You mean Round Rock, right?"), she agreed without hesitation.

I think this picture perfectly captures both Steve and Royer's Round Top Cafe: 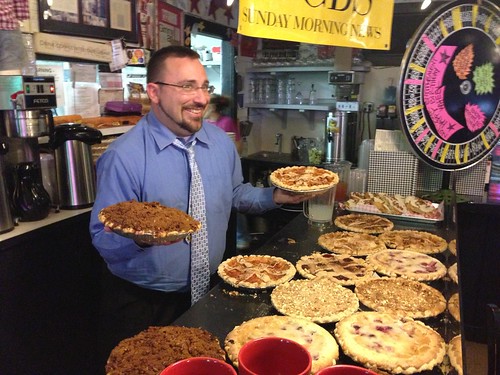 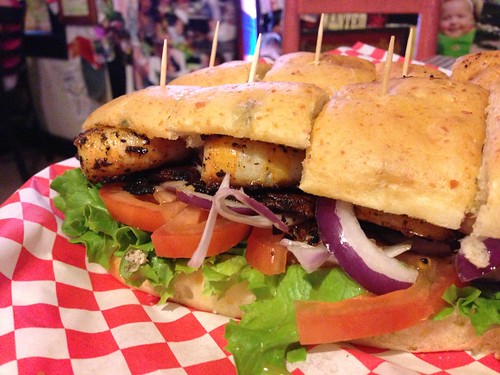 and the enormous stuffed jalapeños (good, but tricky to cut to share among eight people). 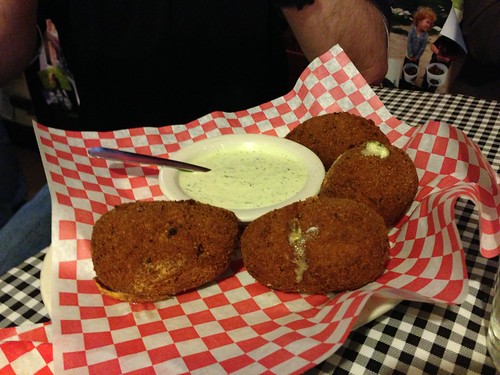 About the time that we prepared to order entrees, we all - the five of us with plenty of Roadfood experience, our guests Adam and Cara, and Bud Royer and his staff - realized that we really were game for anything Royer's might serve. I've thought that before and had it turn out to be false, so I was a bit slow to recognize it now, but discovering now that we were all game was a heady, intoxicating realization. Where we had ordered appetizers by name, for entrees we just asked for five entrees and let Bud and the staff decide.

If you ever have an opportunity like this, to dine at Royer's with a large group of people who are all happy to enjoy whatever comes, I strongly recommend you take it. It was about this time that we started describing the dinner with words like "bacchanalian" and "epic revel". It's hard for me to describe these dishes in detail, because my impressions all swirl together in a kaleidoscope of flavors. I think presenting a jumble of pictures captures the evening better than paragraphs of careful description: 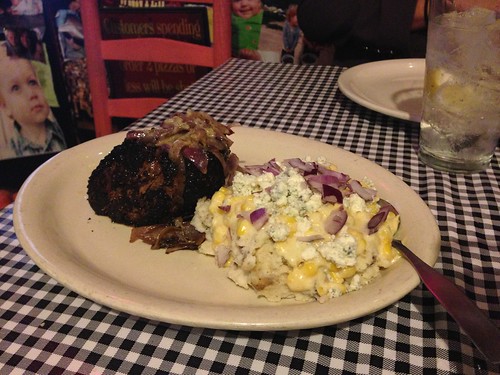 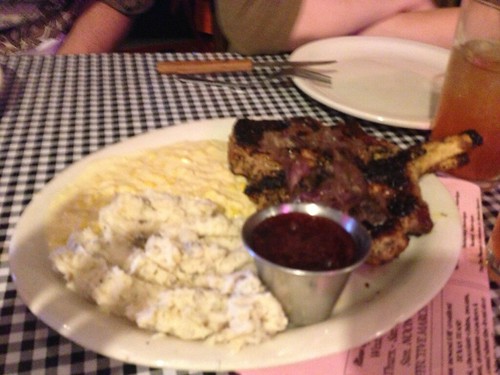 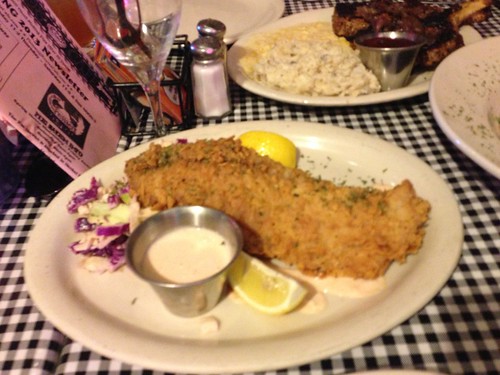 Rack of Lamb, served with a lemon, garlic, basil sauce and sautéed vegetables 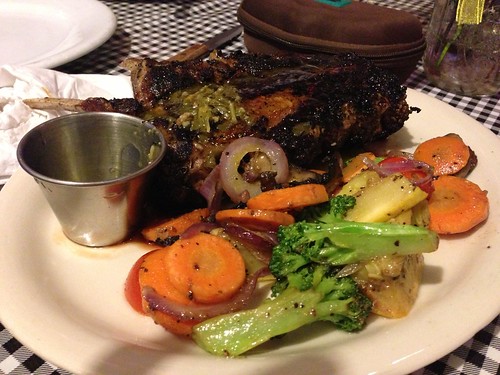 Bud decided that in addition to that, we needed to try the grilled quail (top) and the stuffed quail (bottom).

By the numbers, it doesn't seem an excessive amount of food - less than one entree per person. But the sheer variety (and all of it very good) made us feel overwhelmed. There were leftovers of everything after the first servings, because it's far easier to divide things into eighths than sevenths, and the vast bounty overwhelmed all greed, so we kept proffering each other the last tidbits like doting ethnic grandmothers. "Would you like to finish the lamb chop?" "Surely you want a bit more quail?" 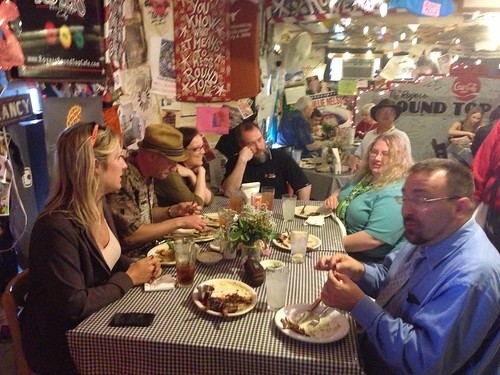 Of course, the other reason that we were slow to finish our entrees is that we were saving room for pie. Royer's is renowned for their pies, and for Bud Royers' insistence that his pies be eaten with ice cream, to the point that pie without ice cream costs an extra fifty cents. We asked for five pieces of pie. Bud decided that we should get eight. (When we got the check, the pie was free, which made me happier about the extra pieces. But we made up for that with a giant tip.)

One down side of ice cream on pie is that it makes it hard to take pictures of the pie underneath. This plate had pecan pie, chocolate chip pie, Texas trash pie (I can't remember what was in this. It's akin to the buttermilk delight pie that has chocolate chips, pecans, and coconut, but the Texas trash pie had more stuff. Very tasty), and the Texas-sized Ho Ho. 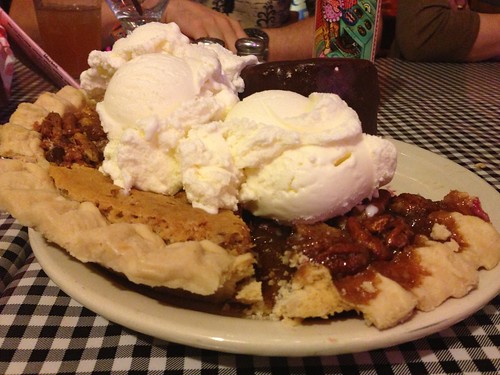 The other plate had Junkberry pie (a medley of fruits), apple pie, strawberry-rhubarb pie, and cinnamon-roll bread pudding. 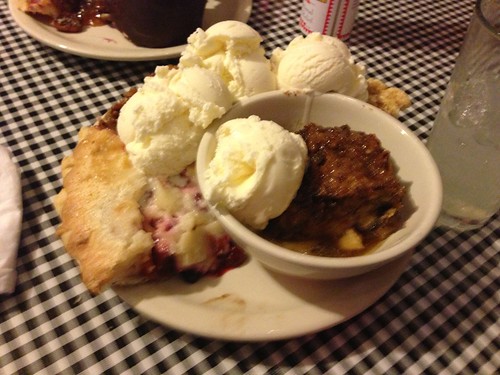 The Ding Dong in cross section. It was one of the best of its kind we've encountered.

All the desserts were delicious, but I do have some commentary on the pies. The filling on Royer's pies is superb, but the crust is not so great. The crust is pale and somewhat shortbread-like - it is far from the best pie crust I've had, and I can make better pie crust myself on a good day. However: ice cream is rough on pie crust; even a good flaky pie crust will turn soggy under melting ice cream. So it all fits together that a passion for ice cream-bedecked pie would go with mediocre pie crust.
To my own taste, ice cream is a better friend to cobbler than to pie. So if Royer's was going to change to suit me (I didn't even suggest this to Bud Royer, because I felt that he is obviously not), he would turn his filling talents towards cobbler instead of pie.

After such a splendid gastronomic debauch, anything else would be anticlimax. But we had one more stop: I had discovered that this trip would give us a chance to see the Austin Lounge Lizards perform in Texas, at the Bugle Boy in La Grange. The Bugle Boy is a very nice space for a concert - it is very strongly focused on listening to the performance, instead of dancing or drinking or talking. I hope that the others enjoyed the Austin Lounge Lizards at least half as much as I did; I had the advantage of being familiar with most of their songs. And some of their topical tweaks to "Old Blevins" made me laugh so hard that I became lightheaded.

I had planned for us to visit Weikel's Bakery for kolaches before the concert, but our long dinner at Royer's made that impractical. After the concert ended at 10:30, I drove us to Weikel's under the belief that they closed at 11. But Weikel's was dark and empty. But this was not exactly a case of not doing my homework: when I checked my notes later, I saw that according to my notes, Weikel's closed at 10pm. So does this count as being travelin-manned, or was this merely being dumb?
Collapse