We had arrived at the airport around 2; by the time we had a voucher for a hotel room and left, it was nearly 6. We went to the hotel room (adequate but a little dingy) and collapsed on the bed for an hour or two. I massaged Lori’s legs, but wasn’t able to wholly banish the ache of standing in line for hours.

But at last we revived enough to consider seeking food. But we had little oomph for deciding, and of course we no longer had any plan to follow. But we called Adam in hopes of another chance of his company. It took us a while to come to a conclusion, but when I mentioned Shady Grove, Adam said it was a great evening for Shady Grove. 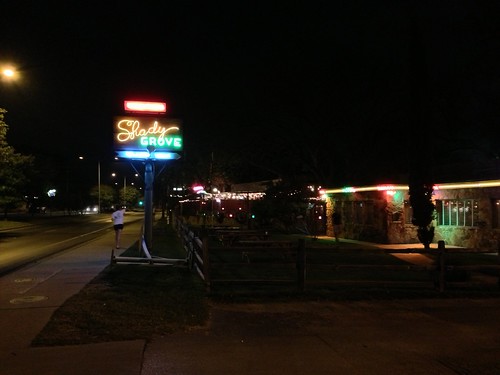 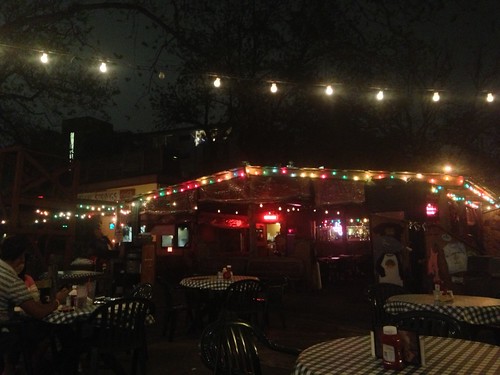 Shady Grove is listed on the Roadfood site, but I hadn’t tried hard to include it, because the review seemed halfhearted. And I thought that we were so aggravated that we wouldn’t be able to really enjoy any restaurant. But our experience at Shady Grove was simply idyllic.

And they were showing The Princess Bride, with subtitles. 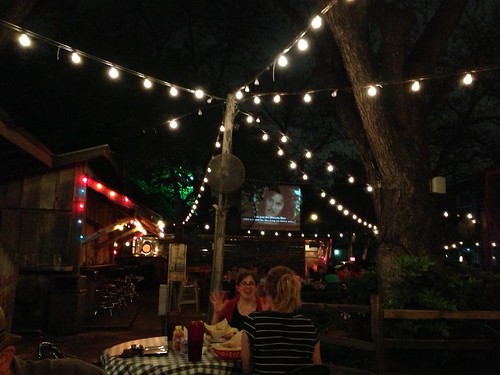 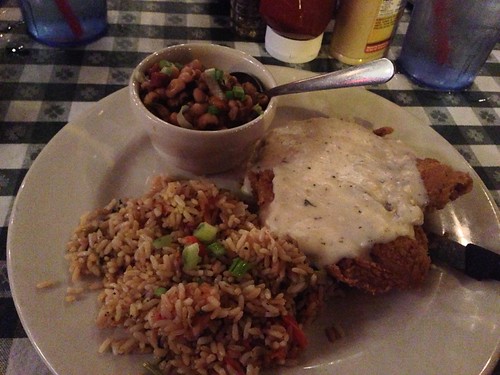 Lori ordered the country fried chicken salad and found it yummy. She noticed that the menu description said it came with fried green chiles, so she ordered them on the side because she has hardly any tolerance for chile heat. I’d expected that the fried chiles would be crouton-sized hunks or slices, suitable for eating in a bite as part of a salad. But these came in foot-long spears with little heat - they would make a great appetizer. 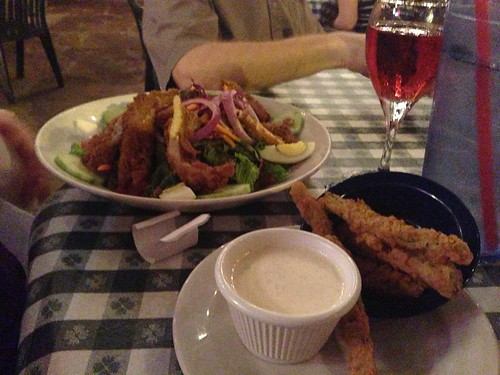 The menu says “Ask about our amazing desserts… they are deliciously homemade!” and in such matters we are nothing if not biddable. We ordered three desserts and shared them all.

The peach cobbler was the best cobbler of our visit. It had a crunchy, streusel-like topping. 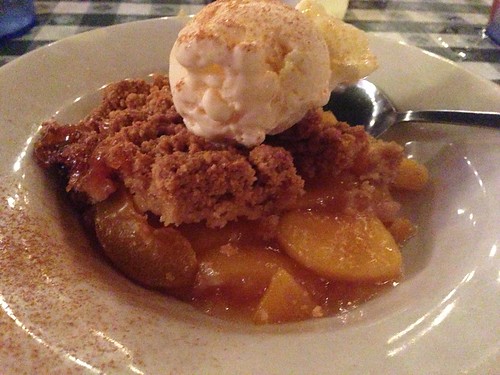 Chocolate icebox pie was certainly, but to my fatigued palate, it tasted little different from a more common French silk pie. 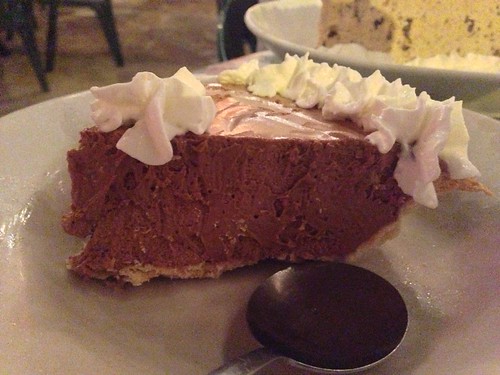 Peanut butter cheesecake touches on one of my own food prejudices, but Lori and Adam enjoyed it. 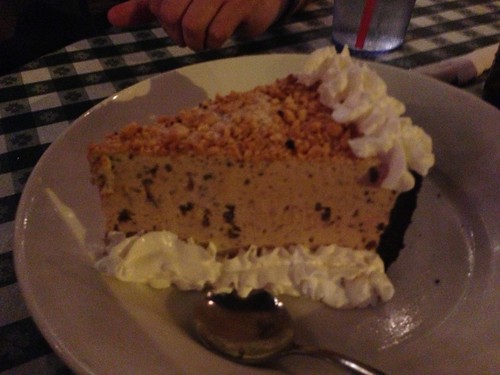 Our evening at The Shady Grove delighted us far beyond my expectations. I wouldn’t go so far as to say that it entirely compensated for the airline frustration, but it was certainly a brilliant silver lining.

On Wednesday, we had time for one spot before our return to the airport. We went for breakfast to Magnolia Cafe, which Adam had spoken well of. Their signage reflects a conscious Austin quirkiness: the sign at the street says “Sorry We’re Open”, and a sign on the wall points out that they are open 24/8. 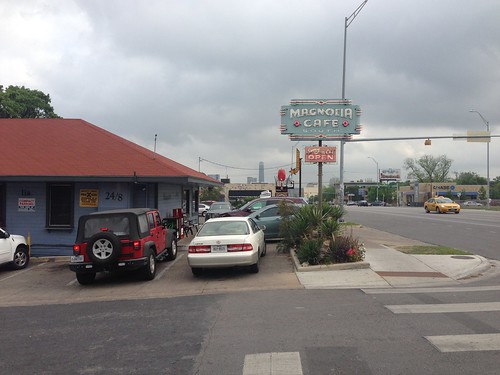 The interior continues that theme with chaotic decor that reminds me of the late Lynn’s Paradise Cafe, in a smaller space with more art on the walls. 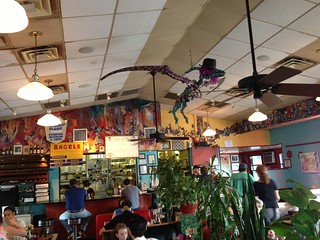 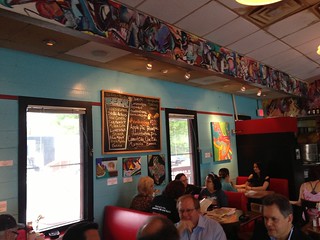 The piece de resistance is the brightly painted pterodactyl wearing a top hat. 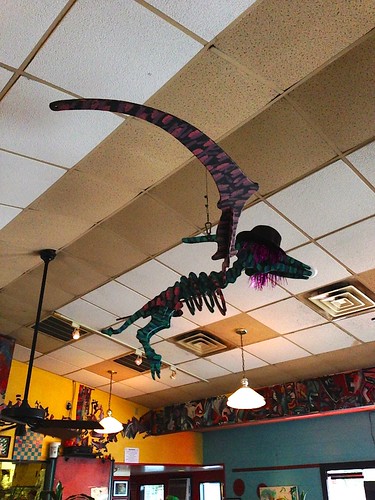 My migas came out looking pretty, but these were my least favorite migas of the trip. The tortillas in the migas were very soft and provided no textural contrast, and the mushrooms and jalapeños didn’t add much to the dish. 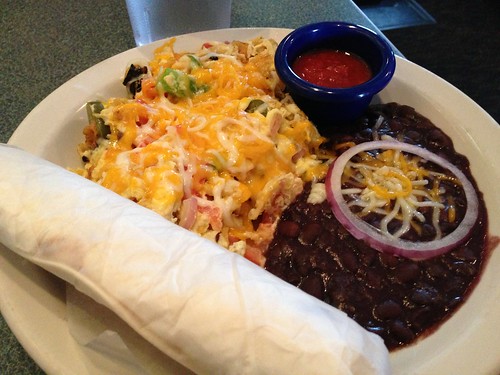 Lori’s strawberry pancakes came out big and thick, but only of good-but-not-special quality. 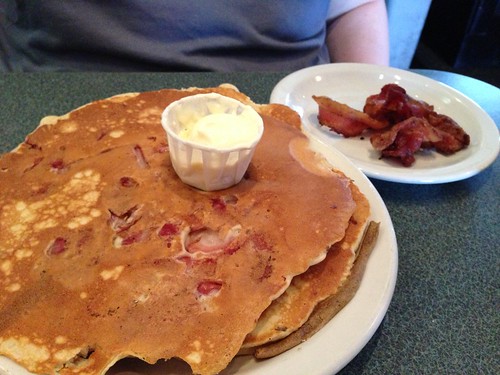 We went to the airport and successfully left Austin. Some trip reports might not consider such things noteworthy.


In the Dallas airport, we saw a Salt Lick food stand. We had passed up eating at Salt Lick while we were in Austin, but Chris had texted us that they had eaten at Salt Lick in the Austin airport. he had said that it was of the same quality as Dickey’s, which is damning with faint parse. But almost all airport food is mediocre, and I like barbecue, so mediocre airport barbecue is as appealing as any other restaurant option. And eating there would let me add another place to my list of Roadfood restaurants, albeit with a very big asterisk. So we had lunch at Salt Lick.

It was bad. It was much worse than I expect Dickey’s to be. (Though in fairness, we ate at Dickey’s in DFW in July, and that was bad too.) Both meats came in a sandwich that was so sodden with sauce that it could not be eaten neatly. The sausage was bland and the brisket was gristly. We had hoped to it would be one last farewell to Texas, but instead it was just a reminder of the pleasures of returning home. 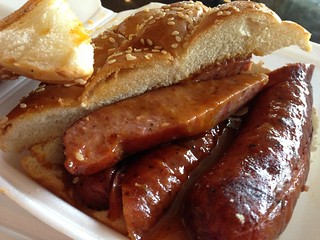 After four and a half months, my Austin trip report is over. I probably won’t write another report until we return from our next trip in October.

Plus a special extra raspberry for American Airlines.
Collapse