Our morning was spent in traveling to the airport and flying to Ireland. It was all uneventful, but we had to walk on and on through Heathrow.

The driver of our cab ride into Dublin was a white-haired man who was wonderfully chatty. He told us a lot about Dublin. He mentioned that we would see lots of Eastern European women holding babies and begging for money, and told us that was a scam.
He also told us about the hurling finals happening this weekend. Our plans for Dublin had not included hurling, because the finals had been scheduled for the previous weekend. But that match had ended in a tie, so they were playing it again our weekend. We resolved to try to watch the game from a pub.

We checked into our B&B in the early afternoon, and then walked towards downtown to find food and tourism.

We walked through St. Stephen’s Green, a lovely park. 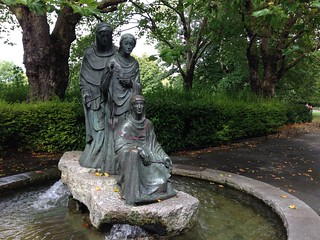 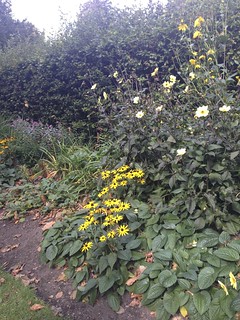 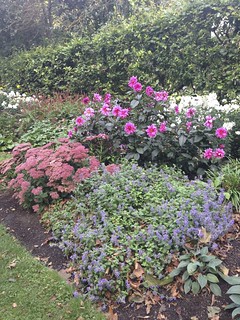 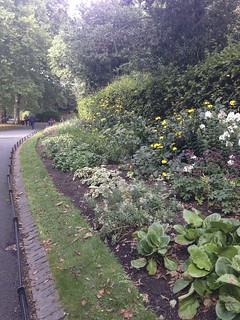 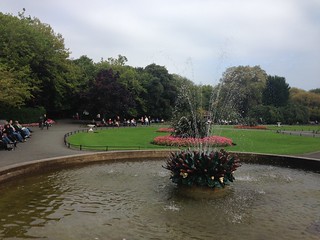 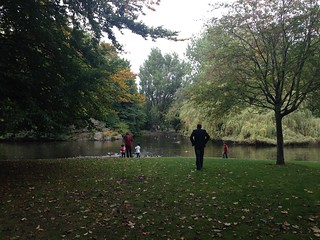 We ate lunch at the Bewley’s on Grafton Street. Bewley’s is a large coffee company, but the Grafton Street location has been a renowned Dublin cafe since 1927. It’s a very pretty place, with beautiful stained glass windows. 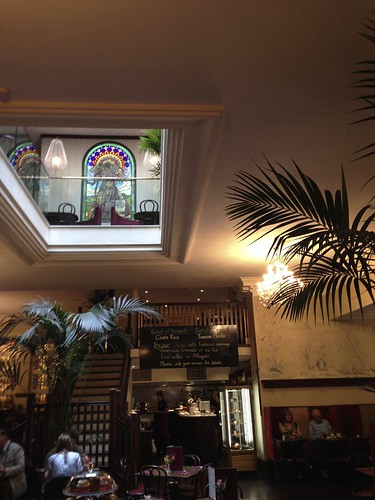 I had a roast beef sandwich, and Lori had a ham and cheese toastie. (A toastie is a sandwich served on toast - but not heated in a way that would melt the cheese within.) The sandwiches were good, but the housemade crisps were really excellent. 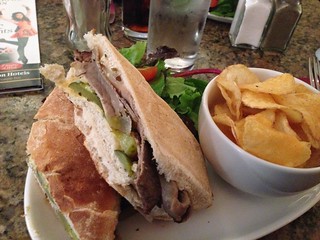 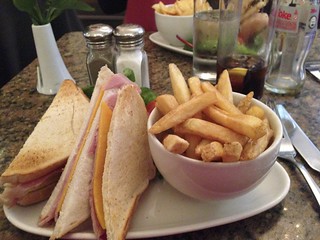 Dessert was a beautiful tasty sticky toffee pudding. It was a tough choice, though, because there were lots of pretty desserts available. 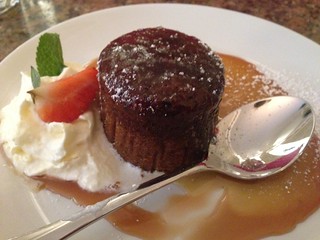 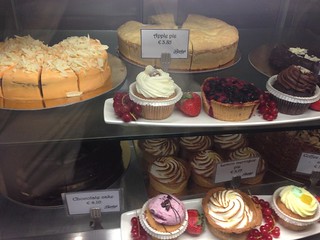 We wandered around the Grafton Street area looking at the fancy shops (and buying a short-term SIM for my phone).

The buskers were worth watching. These sand sculptures were amazing. 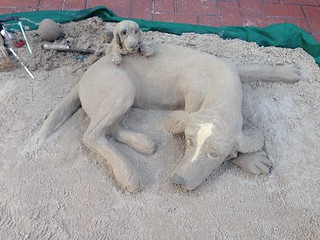 We also saw a curious group of living sculptures. Unfortunately, Flickr is no longer letting me embed our video of what happened when I put a Euro in their cup: https://flic.kr/p/hWWyvf 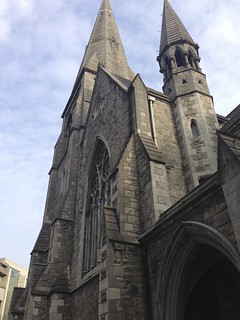 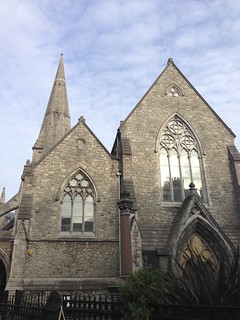 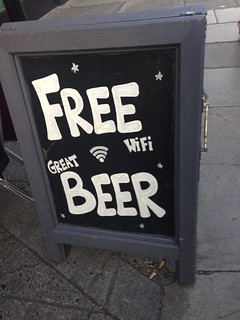 I was interested in finding some sort of Irish dance event while we were in Ireland, and I thought that Dublin would have better chances for it than smaller towns. We found the Museum of Irish Dance, which was advertising a show called Jig the Story of Irish Dance - but the museum was closed by the time we found it, and there was no show that night. I regret missing it - it sounds like an interesting show.

But we had a flyer for a dance show at the Arlington Hotel, so we ambled over there. 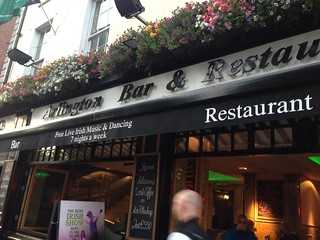 The room was clearly set up as a dance-audience space, with tables raised so that every seat had a view of the stage. The decor was fairly minimal, with Celtic designs painted in fluorescent paint; we feared that it might be really cheesy tourist junk. 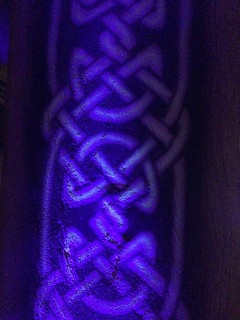 It was certainly very tourist-focused, but the food and the entertainment was really excellent. This exemplifies the good side of being touristy; tourist-oriented can mean a curated experience showcasing the best of a place. 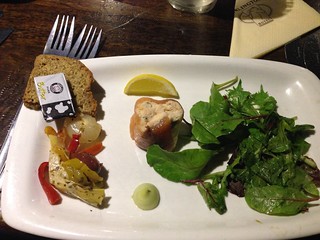 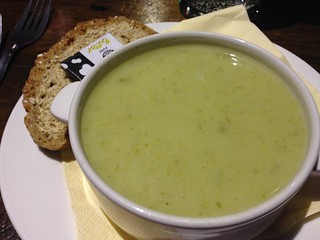 My entree was Irish stew, and it was really splendid. I have not generally cared for lamb, but the lamb in this stew had a gentle, sumptuous lamb flavor that was much better than any lamb I’ve had before. 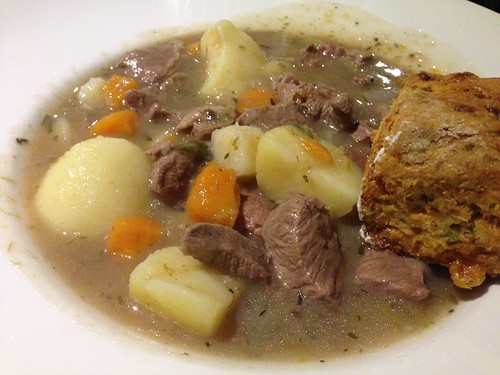 Lori ordered the beef and Guinness casserole. When we ordered, the waitress took care to explain that ‘casserole’ meant something different in Ireland than in the USA; in Ireland, a casserole was a piece of meat braised and then finished on the grill. So this was more similar to a pot roast than a hot dish - but it too was very tasty with deep mellow flavors. 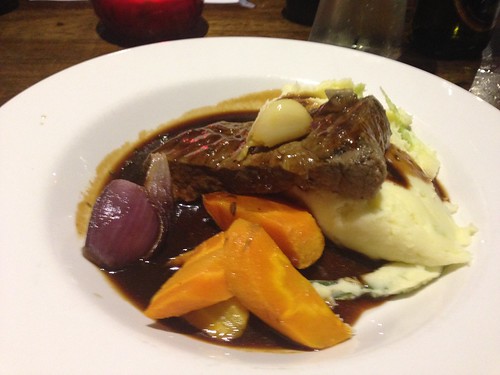 I made sure to have a Guinness, of course. I would like to say that I noticed the difference in taste between Guinness in Dublin and Guinness in the USA, but my palate is coarse and I did not identify a difference. 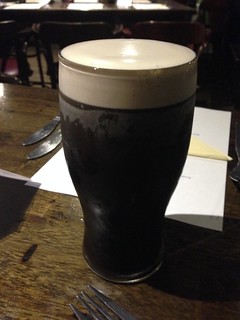 The desserts were tasty but not the best part of the meal. 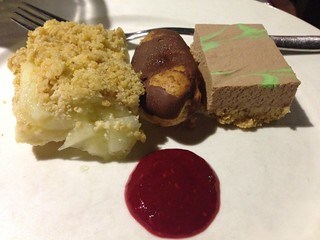 The meal was followed by the music and dancing. The music came from a band called Púca. Lori says “they played everything that I would hope to hear at Mullaney’s [an Irish bar in Pittsburgh] on a good night. It was clearly Irish music for Americans, but they played very well and very energetically.” And the dancers were super skilled and super energetic.
I recorded snippets of video to try to capture the spirit of the music and dance, but Flickr is not cooperating with my embedding.
https://flic.kr/p/hWWjv2
https://flic.kr/p/hWWmbM
One of the last dances was a broom dance, which I had never heard of: https://flic.kr/p/hWXhxk
Collapse