Saturday began with our first encounter with the full Irish breakfast. Clockwise from the top, there’s fried eggs, the British Isles sausage called ‘bangers’, sautéed mushrooms, Irish bacon, and white and black pudding, with tomato slices in the center. I wasn’t totally charmed by the Irish fry; the fried eggs were over-fried for my taste. The black pudding tasted very strongly of blood to me - in fact, it tasted more strongly of blood than a bleeding lip does. But the Irish bacon was very good - everywhere we went in Ireland, we had good bacon and good bread. 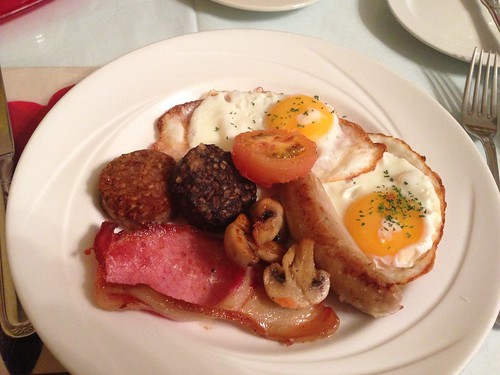 We were delayed getting off because of a work issue that came up. I had planned our trip to be just after a big crunch at work, but the work schedule slipped a bit so that the big crunch happened while we were gone. My coworkers did a laudable job of shielding me from having to think about work while I was on vacation, but on this day an issue came up that really required my attention. I was able to do most of what I needed to do with a a work laptop that I had brought. I would have liked to do more, but the hotel’s WiFi kept dropping out in a way that prevented me from downloading what I needed. (Barely functional WiFi was the rule in our travels. Every hotel and B&B had WiFi, but it was rarely any good.) But I was able to send my co-workers enough information to guide them on the right path.

Very late in the morning, we sallied forth and got on a hop-on-hop-off bus tour. After learning about Kilmainhaim Jail, the Jameson’s Distillery, and the the Guinness brewery, we got off near the Ha'penny Bridge for sightseeing and lunch.

We stopped for lunch at a little restaurant called Bakehouse because it looked cute. We got a really tasty meal. 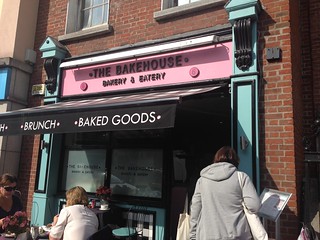 I ordered the Dublin Coddle because I've enjoyed it in the US and because it had “Dublin” in the name. What I’ve had in the US has been a thick creamy stew, but this was a much thinner soup with bacon and vegetables - but it was delicious and the brown bread that accompanied it was wonderful. 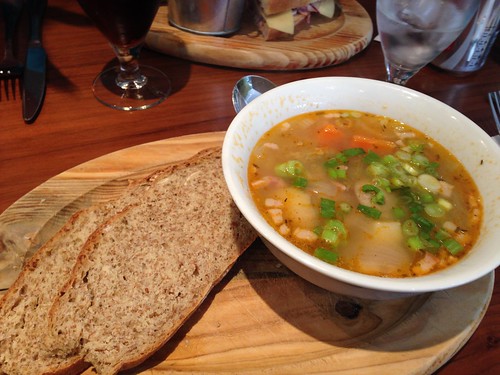 Lori got a ham and cheese sandwich, which was really good. But the star of her meal was the house made chips with cheese and onion. All the crisps we had in Ireland were extraordinarily tasty, as good as any potato chips I’ve had in the US - but we only had them a few times, so I don’t think we have a large enough sample to claim that there’s a general Irish excellence with potato crisps. 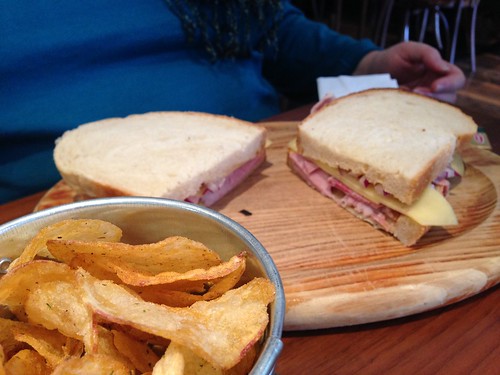 The bakery case was full of beautiful baked goods, but the lemon muffin and Bakewell tart we chose for dessert was not nearly as special as our entrees. 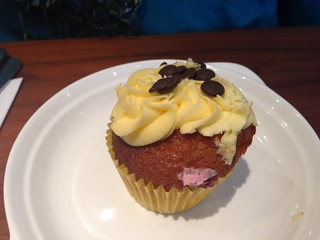 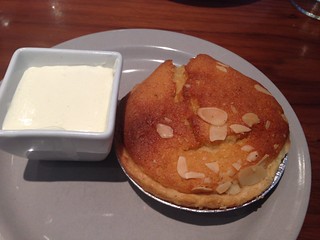 Bakehouse was just a few yards from the Ha’penny Bridge. 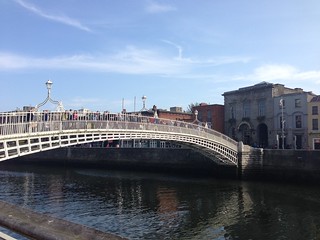 We got back on the bus tour. The Post Office is pocked with shrapnel from the fighting in 1916.

The Millennium Spire is widely referred to as “The Stiffy on the Liffey”. 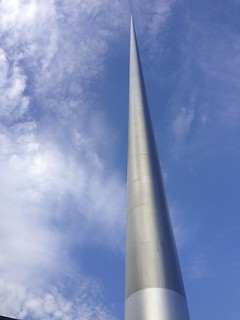 The bus was moving very slowly, though, because the streets were packed with hurling fans heading towards the stadium. There were apparently eighty thousand fans crowding Dublin for this hurling match. The red shirts identify these fans as supporting Cork. 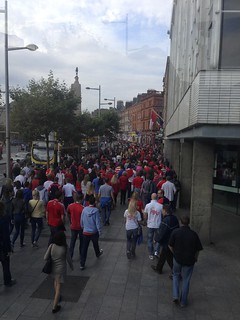 I had been interested in hurling even before we came to Ireland, but we weren’t interested enough to pay hundreds of euros to attend a sport we’d never seen. I decided that the hurling experience I wanted was to watch the game at a sports bar, where the game was showing on TV and fans would tell us when to cheer. But we also had plans for a Musical Pub Crawl later, so we were looking for a place near the starting pub for that. We did not quite achieve our goals; we found a pub where the match was showing on TV, but there weren’t fans watching; the guys in front of the TV were playing poker instead of watching. Without fans in the bar to provide a team to root for, we chose to root for County Clare on the flimsy basis that we were spending more time on our trip in Clare than in Cork. 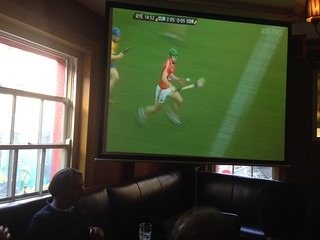 Hurling is an awesome sport. My summary of the rules based on watching one game without explanation:
- Each player has a hurling stick called a hurley. If you think of a flat spoon about the size of a man’s forearm, you’ll be in the ballpark for what a hurley looks like.
- The ball is a leather-wrapped wooden ball about the size of a baseball.
- A player can take only a few steps while holding the ball; going farther than that involves bouncing it on the hurley while running full speed.
- There’s a goal at either end of the field. Getting the ball through the goal at a low enough level that the goalie could conceivably block it scores three points. Getting the ball between the uprights above the bar scores one point.
- That’s most of the rules; have at it, lads.

It was a very fast, dynamic game. The ball travels at up to 90mph, and the players were running up and down the field all the time. And it was a very exciting game - as balanced as you would expect from two teams who had tied the previous weekend. Clare took an early lead, but Cork managed to tie the game twice before Clare eked out a narrow victory at the end.

I really liked hurling, and I would watch it in the US if I had an opportunity.

We ate dinner in Gogarty’s, the pub where the pub crawl would start. Lori’s chicken and ale pie was not very good, with a very tough crust. My fish cakes were pretty good. 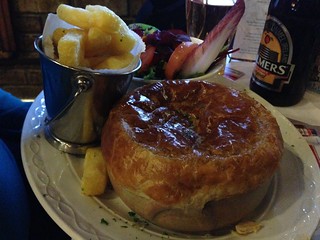 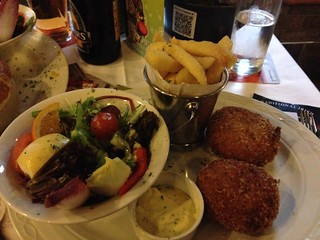 The Musical Pub Crawl is certainly an experience for tourists, but it tries to go a bit deeper with some explanation of what it’s like for real musicians playing in a session for themselves, instead of playing hoary standards for tourists. Plus drinking in pubs. It was that last bit that marred the experience on this night. The pubs were all full of hurling fans and unwilling to reserve a room for the Musical Pub Crawl, so the Pub Crawl visited only two pubs, and they were separated by a very long walk that made us fear that we might fall so far behind the rest of the group that we lost track of them. But we liked the explanations and examples of the music; the main thing I remember is that reels are in 4/4 time (counted as “cat-er-pill-ar, cat-er-pill-ar” for young musicians) and jigs are in 6/8 (counted as “rashers and sausages, rashers and sausages”). 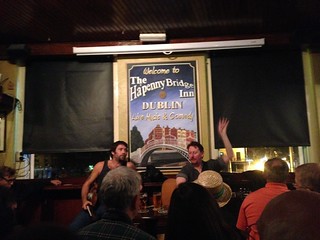 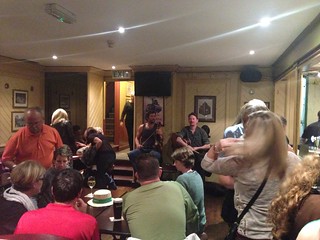 Eight seconds of video from the Musical Pub Crawl: https://flic.kr/p/hWWwxD

We got a cab ride to our hotel after the last pub on the crawl, with a cabbie who waxed profusely about the hurling match and his own experiences with hurling and boxing in his time in the army. He was the one who told us how fast the ball travels, and pointed out that all the team members were amateurs - in fact, school teachers are favored for hurling because summer vacations give them extra time to practice.
Collapse