On Monday, we got up and had one more Irish fry.

As I was heading upstairs, someone accosted me in the stairway. In a French accent, he insisted upon telling me that my snoring was keeping him awake - but the word “snore” wasn’t handy for him, so he had to substitute honking onomatopoeia. I was totally taken aback, and had no idea how to respond. When I told Lori about it later, she said that someone had been pounding on the door in the middle of the night; she’d put it down to ghosts, but apparently it was a pushy Frenchman.

We got the rental car with very little incident. Hertz upgraded us to a larger car, a Volkswagen Golf. The travel guides we’d read had recommended getting the smallest rental car one could, so I asked for a smaller one. As usual with me and rental agencies, it took me a while to figure out that “We’ve upgraded you” is code for “we don’t have any cars of the size you wanted.” Once that was established, I stopped fussing and we went off in the Golf.

Driving on the left side of the road required all my attention.

Our first destination in the car was Brú na Bóinne, the site of a great many prehistoric sites.

We started with lunch in the cafe in the visitor’s center: a chicken, leek, and mushroom pie with rhubarb pie for me, and a ham and cheese quiche and a caramel shortbread for Lori. Both of these were very tasty. The cafe is certainly not the reason to visit Brú na Bóinne, but our meal was very good. 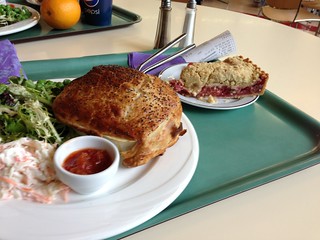 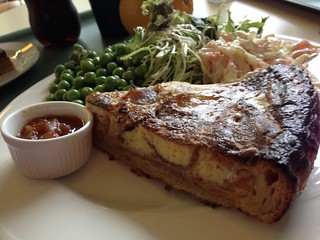 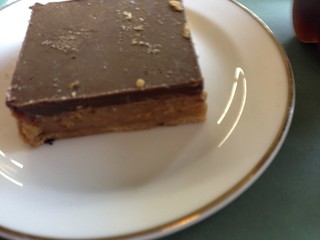 We only had time to visit one of the many sites at Brú na Bóinne, so we chose Newgrange. (The other two major sites are Howth and Dowth.) Our admission to Newgrange included a bus ride to the site. These pictures show the sort of weather and scenery we saw that day; cloudy and damp without actually raining much. But they also do show the verdant beauty for which Ireland is renowned. 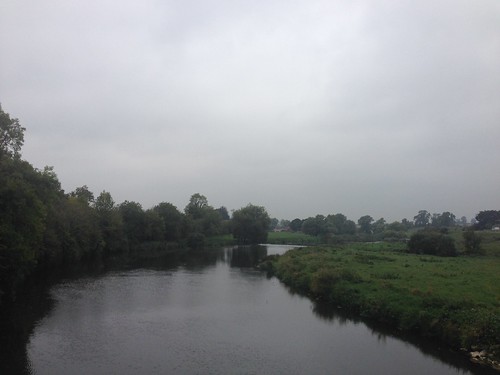 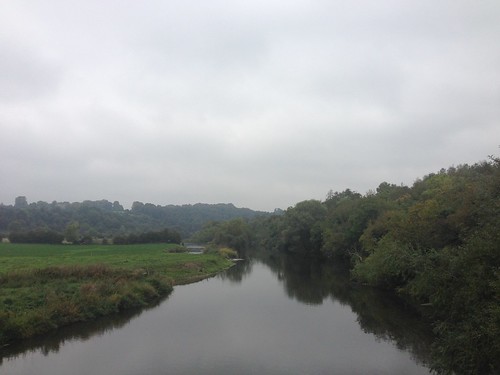 Newgrange is a passage tomb built on a hill. It was originally built around 3200-3100 BC, about five hundred years before the construction of the Pyramids. It was covered by a hill for centuries, and then rediscovered in 1699. (The front wall of quartz is a reconstruction, though apparently an accurate one.) 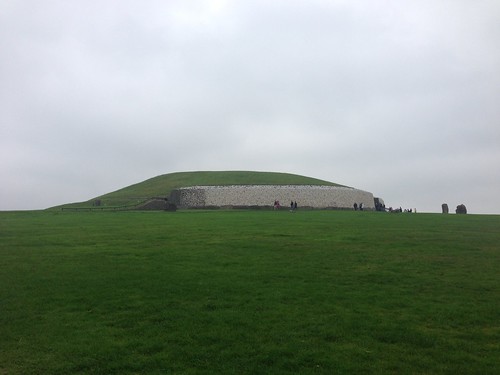 From the entrance, a narrow hallway slopes upward to three little rooms at the end. At dawn of the winter solstice, the sun shines through the opening above the doorway and penetrates up to the inner chamber. Electric lights have been installed to show visitors what that dawn is like, or there’s a lottery to be among the lucky few who get to be inside the chamber that day. (I had inferred that it was only on a single day that the light penetrated. It’s actually about six days centered on the solstice. It’s still an impressive feat of astronomical calibration.) 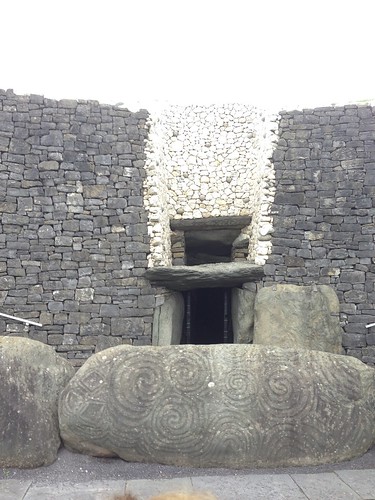 The thing that really impresses me about Newgrange is just how much planning and coordination it required. It’s not just the labor required to move the stones in place (Wikipedia says the entrance stone weighs about 5 tons, and it came from a river valley tens of miles away to the top of this hill); it’s also the scope of the plan. I made rough calculations about how long it would take to build Newgrange from what the tour guide about the population of the British Isles at the time and typical lifespans of the time. I forget the number I came up with, but it was multiple generations, long enough that the builders who started the project could not possibly see its end. (Wikipedia cites estimates of five years or thirty years, both of which are much shorter than my rough estimate.)
I build software for a living. For my team, our product of six years ago is so old that we don’t try to support it. Ten or fifteen years ago is a significantly different era of computing; twenty years ago is so old that I can’t read any of my floppy discs from that time. Even at the level of coordination of our federal government (which coordinates far more people than lived in the British Isles at that time), I can’t think of projects that take more than a few years without immediate benefit.
I can imagine how you would figure out how to align the passage to catch the rays of dawn on the solstice, but carrying out that plan over generations seems well-nigh unfathomable to me. I do know of other multi-generational projects, such as medieval cathedrals, but this takes on an extra level of bogglement because of the lack of written language. I can only dimly imagine generations of scholars memorizing and reciting the lore of just where the stones should go to carry out this process, and it staggers me. 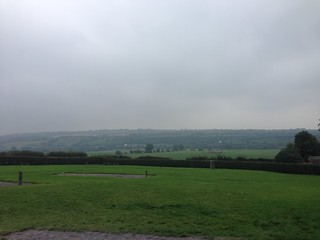 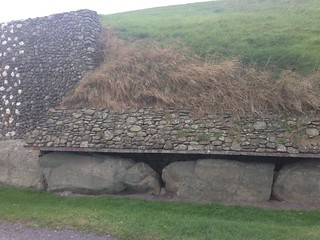 How long would it take to carve these stones when your only tools are rocks and antlers? 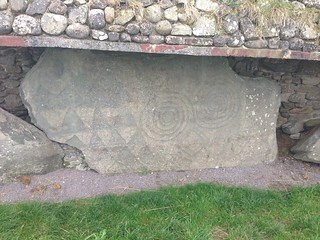 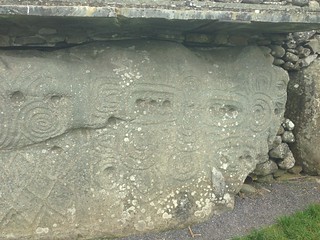 The site was reused centuries later for other structures whose meaning is equally uncertain to us. 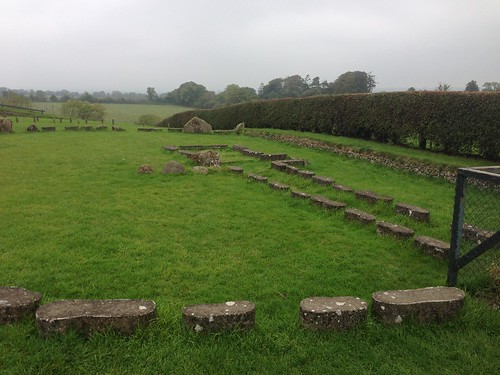 A panorama of Newgrange (you can click through for a larger version): 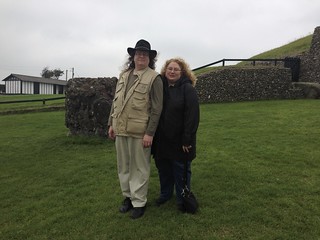 As we drove away from Brú na Bóinne towards Kilkenny, the roads were very narrow. And though I was doing okay with remembering to drive on the left, I didn’t yet have an accurate sense of how the car was arranged around me. The point of this ominous foreshadowing: before I had driven a full hour in Ireland, I swerved to avoid an oncoming car and sideswiped a parked van. We parked and got out to assess the damage. We found the owner of the van, a guy working on a house nearby. We could not have asked for nicer treatment; he looked at the long mark on the van and said, “looks like you’ve improved it.” (The van was mud-splattered and worn, but although I might agree that we didn’t do any significant harm, I could not claim to have improved it with a straight face.) He assured us that he wouldn’t contact Hertz about the accident, and he advised us to get a replacement for the cracked side mirror, install it ourselves, and say nothing to Hertz. (We didn’t follow his advice; we used the accident-recording kit in the glove compartment.)
This shook my driving confidence for the rest of the trip.


Our destination that night was Lawcus Farm Guesthouse in Stoneyford, a small town of about five hundred people near Kilkenny. I had asked Lori to arrange a stay at a Farm B&B, and we had an impression of a place where we would hear chickens and be invited to help feed the pigs. Lawcus Farm was not at all what we had expected, and it was utterly splendid.

We knocked on the door near sunset, and Ann Marie welcomed us inside. She told us that she’d upgraded us to a deluxe room. This time we understood the code and didn’t argue with the upgrade. And what an amazing room it was! It was huge, spacious, and gorgeous. 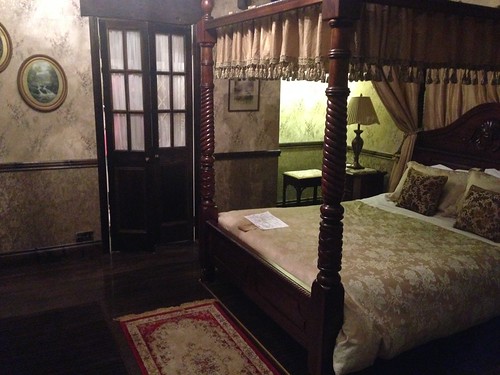 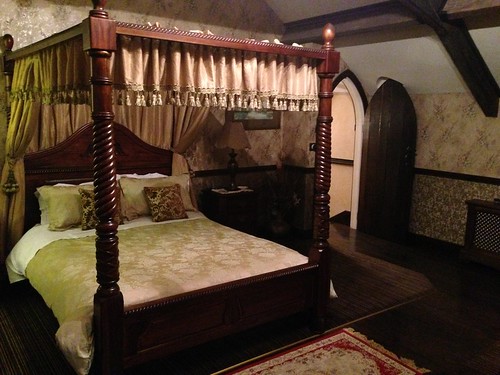 Ann Marie’s husband Mark gave us a photocopy of a hand-drawn map of local sites. He gave us a recommendation for dinner: he said that Stoney Kebabish does good food, but they have no dining space. So the thing to do according to Mark is to order food there and have them deliver it to Malvard’s pub down the street. We followed Mark’s guidance and discovered that we were not the only Lawcus Farm guests to do so that night. 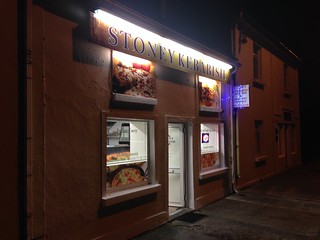 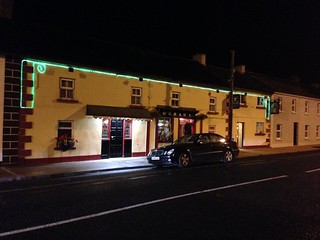 We spent the whole evening in conversation at Malvard’s. This was close to the craic we were seeking for our Ireland trip. (Craic is an Irish word for convivial conversation and banter - but see the Wikipedia article for discussion of whether it’s a real word.) But: our conversation was with the bartender and the other guests of Lawcus. There were no locals in the bar at first, and when locals did come in, their conversations didn’t merge with ours.

We definitely over-ordered at Stoney Kebabish, and got far more food than we could eat. I ordered the chicken goujon kebab, because I’d seen “goujon” on menus everywhere. The dictionary definition of goujon is a type of catfish, but based on this sandwich, I think that chicken goujons are more or less the same as chicken fingers. This was a tasty wrap in a soft bread, sized about the size of my forearm. 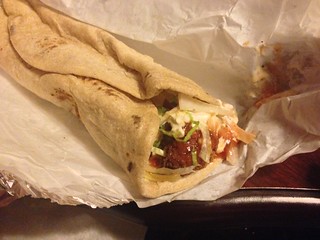 We had seen curry chips on a travel documentary, so I was eager to try them the first time I saw them on a menu. These are potato chips topped with curry sauce. 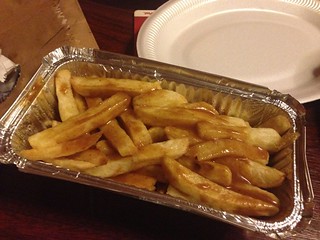 Lori chose the fish and chips, and both the fish and the chips were better than other examples we’d had on this trip. 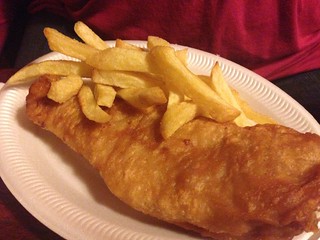 For dessert we had a sweet naan with a creamy filling. I took no photo and I’ve forgotten the details, but it was our first encounter with a sweet naan.
Collapse