Is this not the prettiest porridge breakfast one could wish for? This was actually a second attempt; Lori had ordered the porridge, but received a bagel with bacon and egg instead. 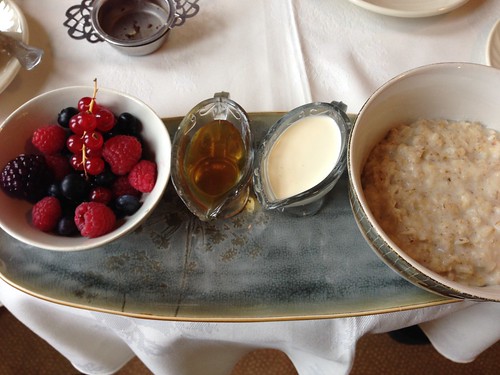 We took a walking tour of Kinsale in the morning, even though it was a wet, grey day. Barry the tour guide had large umbrellas available for the use of the tourists, which was a remarkable courtesy. Barry was a good tour guide and did a good job of explaining Kinsale’s history. Much of the wall that enclosed Kinsale in medieval times is still present, and the five historic gates still constrain traffic. 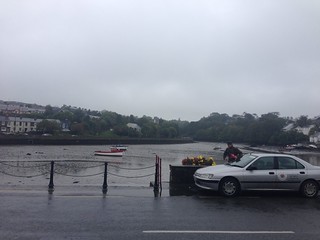 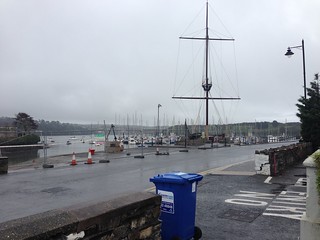 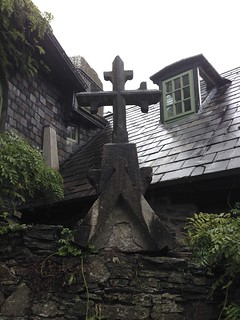 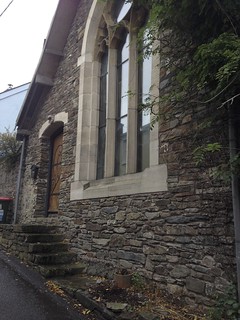 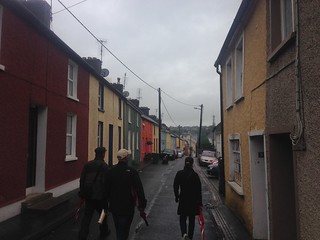 The medieval tax schedule is still posted in the old town hall (now a tiny but interesting museum). 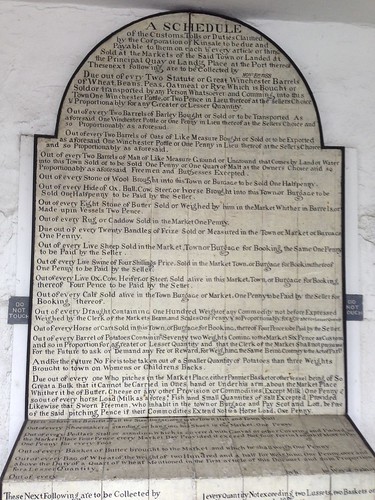 We ate lunch at the Lemon Leaf Cafe, a bright little cafe tucked into the back of a gift shop. Lori got a lovely cup of tomato soup (just the thing for a rainy day) and a very nice ham and chesse sandwich with apple and raisin chutney. Again, in the US such a sandwich would probably be toasted in a way that melted the cheese, but here it was just served on toast. 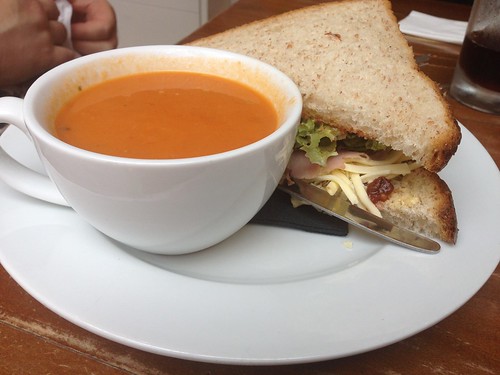 I got my share of melted cheese, though, with a bacon and cheese rarebit that was simply fabulous. With great smoky bacon and sharp cheese, this was a meal worth a long journey for. 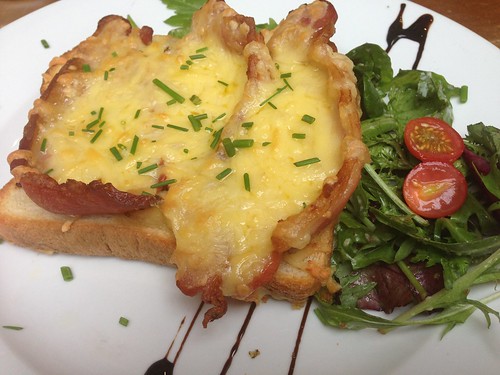 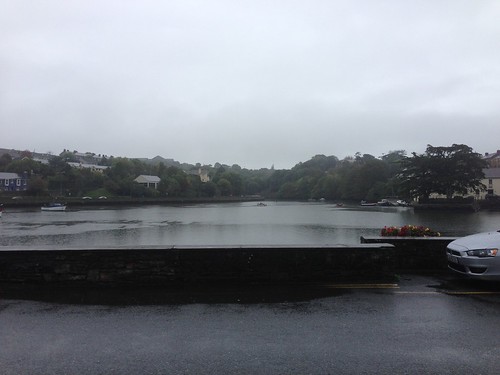 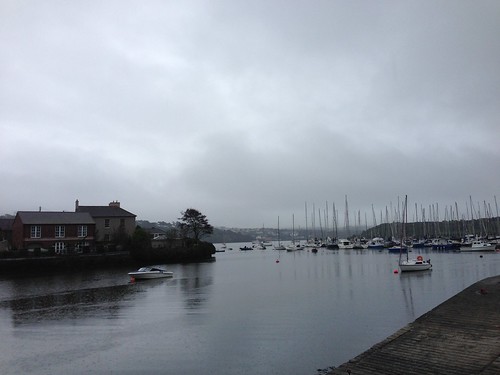 We spent the afternoon with a bit more sightseeing and a bit of shopping. We bought cut crystal glassware at Kinsale Crystal. Cut crystal in Ireland has changed over the last few years. Waterford Crystal was the most famous Irish crystal company. But in 2009, Waterford went bankrupt and closed the factory in Waterford, and most of the production has since been moved to Eastern Europe. But a group of former employees now makes crystal under the name Sons of Waterford, and sends the blanks to small local shops like Kinsale Crystal to be cut and sold to tourists. (And these shops are very accommodating for tourists; they offered to ship our purchases directly to our home so that we didn’t have to worry about packing glass in our luggage.)

Lori spotted a beautiful rainbow shawl in Kilmaran Woolens, and I bought it for her as a Christmas present with the thinnest possible pretense that she did not know what I had purchased.

Because Kinsale is known as a town for gourmet dining, we looked for another gourmet restaurant for dinner, and ended up at Finn’s Table. This was an exceptional dinner, one of the best of our trip.

We ordered half a bottle of wine in the happy knowledge that we wouldn’t be driving anywhere. Julie Finn, one of the proprietors, cheerfully offered to decant it for us, even though it was only half a bottle. 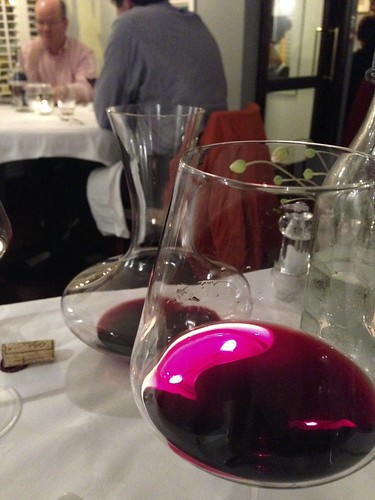 I liked brown bread everywhere we went in Ireland, but I especially liked it here. The white herb roll was also excellent. 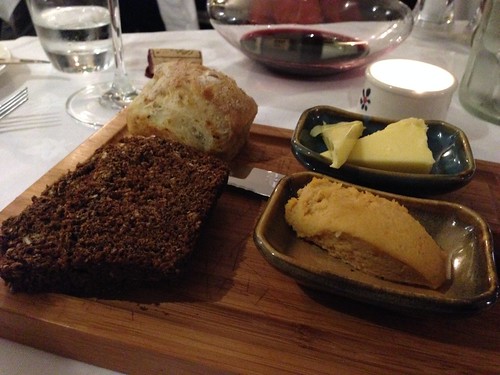 Lori began her meal with the tomato, ginger, and rosemary soup. Lori generally avoids spicy food, but the ginger and rosemary seasoned this very nicely. 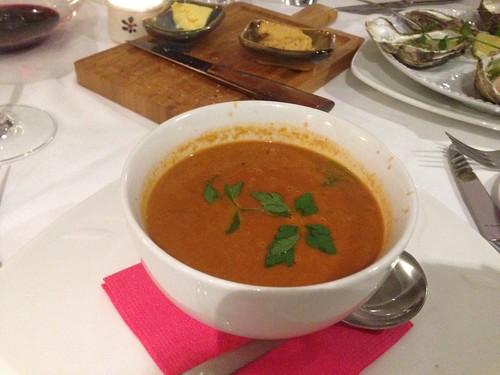 Kinsale is a port town, so local fare means seafood. So for my appetizer, I ordered the grilled oysters with vodka, lime, cilantro sauce. These were really outstanding; the seawater taste of the oysters came through clearly, but the sauce transformed it and made it radiant. (When I praised the oysters to the proprietor, she tried to introduce me to the oysterman who had gathered them, but he had just left the restaurant.) 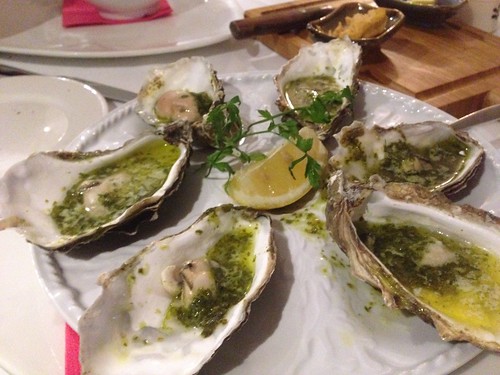 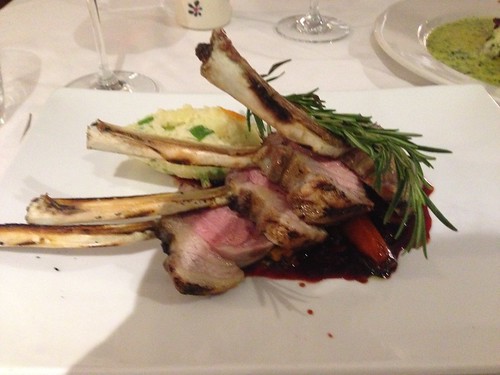 My entree was the surf and turf with fondant potatoes. (The lobster came from local waters, and my beef and Lori’s lamb were raised by Julie’s husband’s parents.) 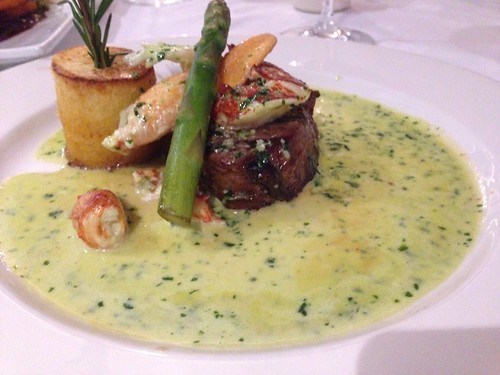 Lori’s dessert was a selection of caramel tart, house made ice cream, and chocolate mousse. 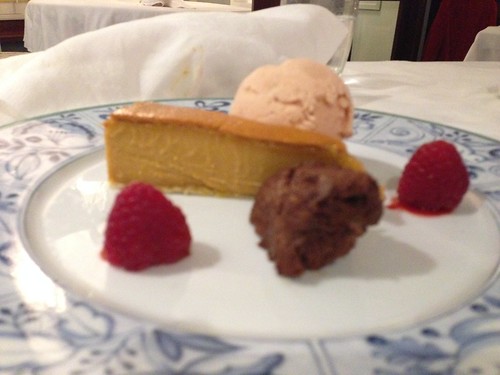 However, I won the better dessert with mine: lemon posset with blackberry sorbet and housemade shortbread. (A posset is a chilled milk dessert, similar to what I call “pudding” in my American dialect.) The flavors were radiant and sumptuous, and it was a splendid finale to the meal. 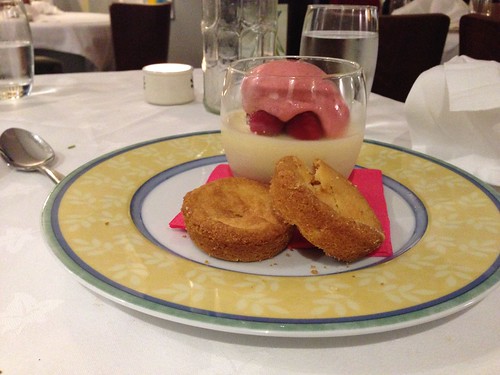 We had some chances to talk with Julie Finn at some length because we praised the food so highly. She said that she and her husband have only been in business in Kinsale for a year or two. We certainly think they’re off to a terrific start, and we wish them every success.

We wound up the night at Dalton’s Bar looking again for craic. The two women customers left shortly after we arrived, but we had some pleasant chitchat with the bartender. 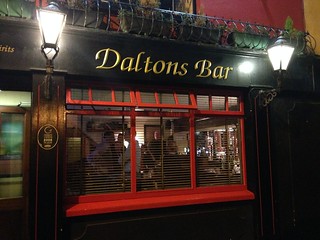 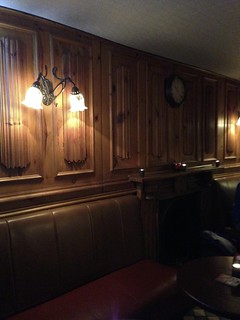