Breakfast at in the fine dining room at Ballyseede was very nice; I had eggs Benedict, and Lori had an omelet. 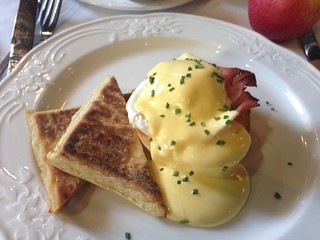 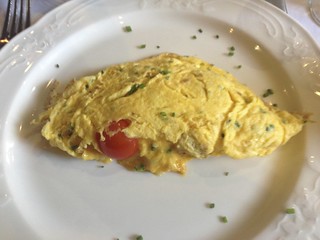 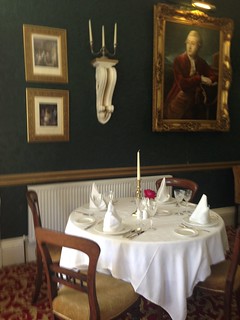 This is the other dog of Ballyseede, a gentle Irish wolfhound (shown with a small child for scale). He (the dog, not the child) is named Mr. Kenny, after Enda Kenny, the current Taoiseach (prime minister of Ireland). 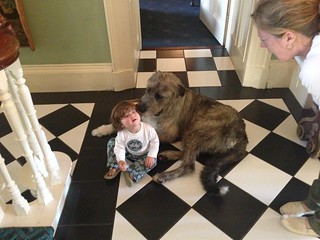 Some more pictures of Ballyseede and its gardens under less gloomy skies: 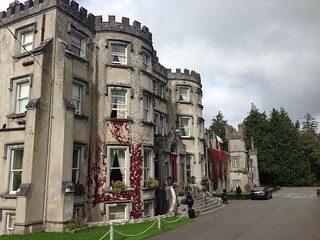 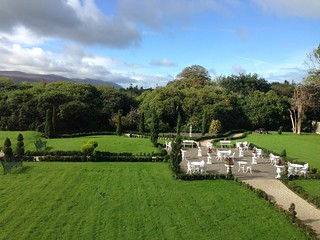 Our path this day took us northward along the coast to Galway. We took the car ferry across the Shannon river. The passenger door was obstructed enough that Lori had to sit inside for the whole ride, but I was able to get out and feel the wind and take in the scenery. It turns out that Lori didn’t miss that much in scenery: 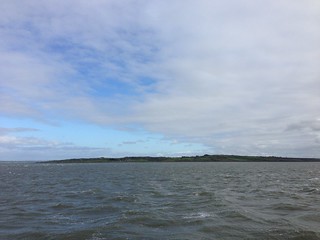 I did get a chance to see the nearby Guinness plant: 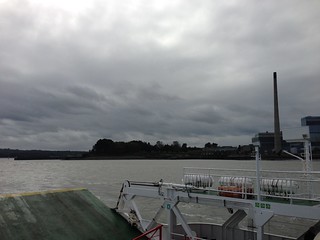 Towns were few and far between on the coast of County Clare when we started thinking about lunch. I tried to use my Roadfood instincts, but we chose the Quilty Tavern more for location than from an instinct for quality. 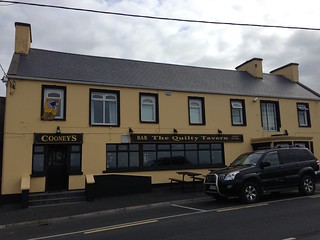 It was one of our worst meals in Ireland. I ordered the seafood chowder because we were on the coast, and it was unpleasant, with a flavor that was strongly fishy and almost rancid. My ham and cheese sandwich was also a perfunctory assembly of cheap ingredients. Lori ordered the Quilty Club on the theory that the name of the town meant they took a particular pride in the sandwich - but although her sandwich was better than my food, this was not a sandwich that merited any pride. And the service that we received was so neglectful that it would have needed to improve a few notches to qualify as negligent. I was very glad that I had enough small currency to cover the bill I calculated and leave, because waiting for a bill and credit card processing might have taken another eon.
But note that Lori’s sandwich was served on fine china, and my tureen of soup came on a doily-lined plate. And the pub was a Victorian beauty with lots of polished old wood. Once again the beauty of the pub seems to have no connection to the quality of the food and service. 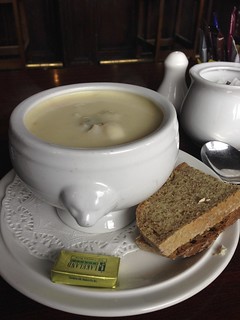 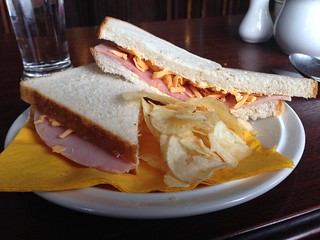 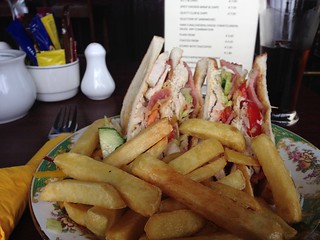 Quilty does not have the cliffs that mark the coast to the north and south. 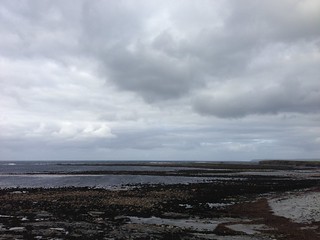 We had other cliffs in plan, though - our scenic destination of the day was the Cliffs of Moher. They are one of the famous sights of Ireland, but also famous in the movies for roles like the Cliffs of Insanity in The Princess Bride.
Unfortunately, we arrived in late afternoon and the western sun made it hard to take good pictures - but we try not to be the type of tourists who insist that geography be rearranged to suit our schedule; it is both rude and ineffective. 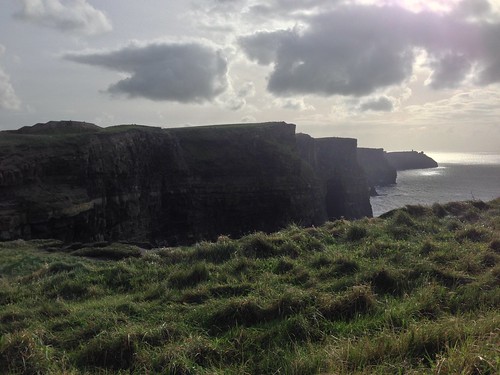 Lori had visited the cliffs on a previous trip in 2001, but since her trip they have built a visitor’s centre. It’s quite a nice visitor’s center, actually, with some good exhibits on the history and geology and a dizzying movie from the perspective of a bird in flight - but the cliffs are far more of a stirring sight.

I was surprised to learn that O’Brien Tower was built as recently as 1805. 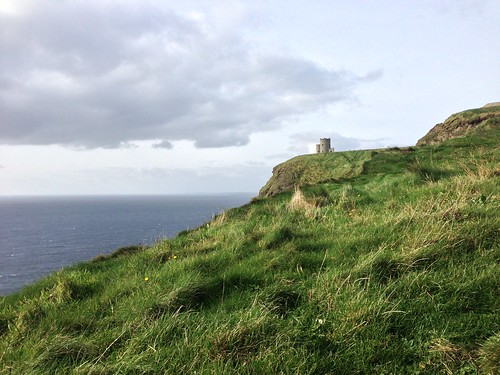 I don’t actually have something to say about each of these pictures. You can interpret a lack of text as “yet another picture of the cliffs." 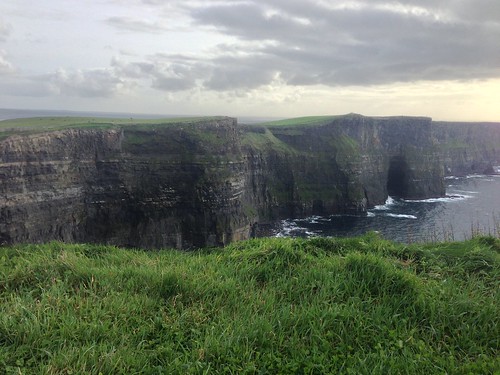 I saw a coin-operated telescope that still had some time on it (actually, I didn’t realize that it was coin-operated until it shut off), and I decided to experiment with taking a picture through the telescope with my iPhone. I think the results are more “interesting” than “awesome”, but it’s kind of nifty. 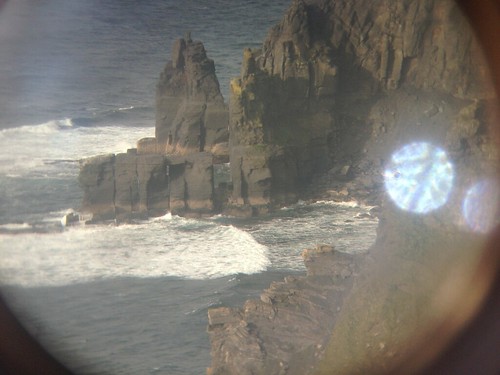 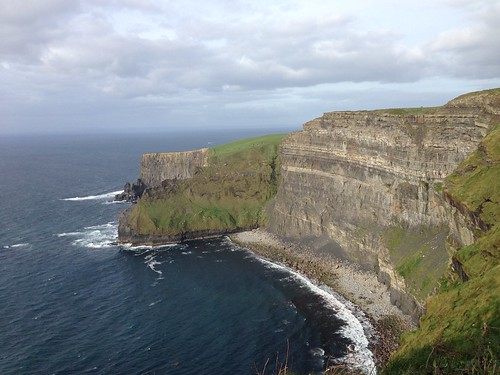 This warning sign makes me laugh. I would have bought a t-shirt featuring this graphic if they had had it in my size. (The other sign we saw: every few yards we saw signs for suicide hotlines. We were told later that Ireland is having a big problem with suicide, so much so that 15% of deaths of young people are due to suicide.) 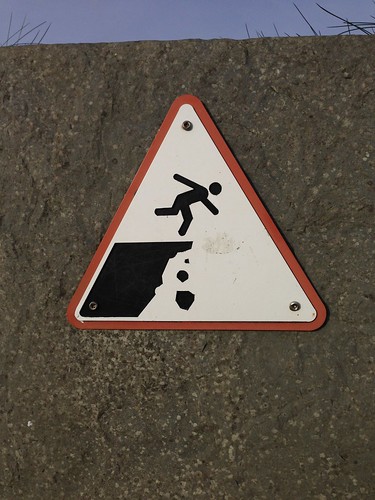 I walked a bit south of the visitor’s centre, and tried to get a picture that captured the scale of the cliffs. This is my best attempt. That’s O’Brien Tower again, and it is a modest tower but still probably three stories high or so. And this is not a perspective trick; the tower is on the cliffs it appears to be on. The cliffs are really much higher than the tower. 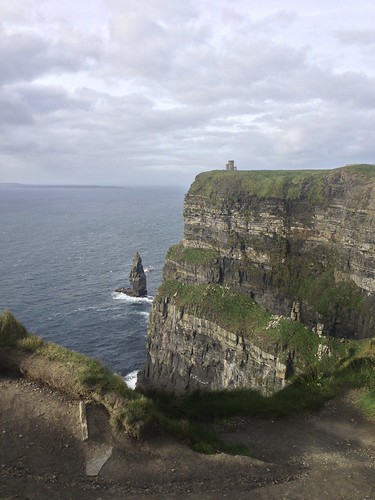 So I’ve shown all these pictures from the top of the cliffs, and they are imitations of the photos of the Cliffs that you see in guidebooks and and websites. But what do you see if you look east from the cliffs, towards the land? You see a stone fence and cows, just a dozen yards from the cliffs’ edge. 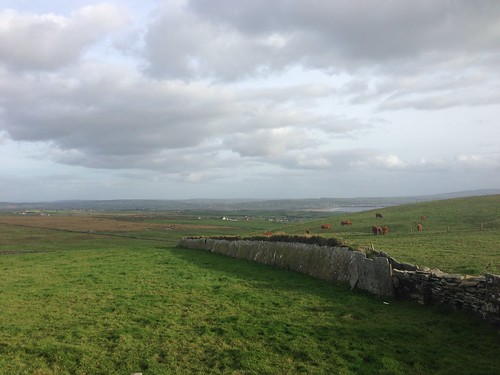 We drove through the very small town of Doolin because Lori had stayed there years before, but did little more than take pictures of the ocean under cloudy skies. 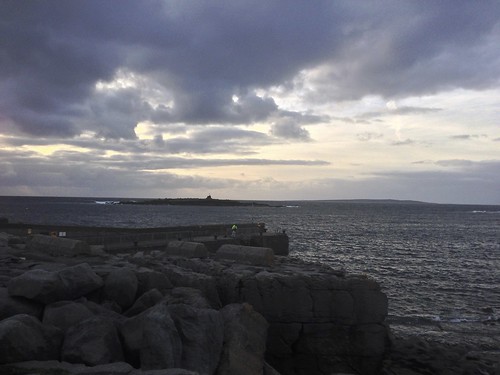 We got to Marless House, our B&B near Galway, a bit after dark after some navigation difficulty; the streets were complicated enough that I was able to pay attention to either the roads or the GPS, but not easily both.

For dinner, we went to Lohan’s in downtown Salthill at the recommendation of Mary, the innkeeper.

I ordered a Galway Hooker and it was a very nice beer. Lori won the alcoholic beverages of the evening, though, with a Kopparberg Fruit Cider. 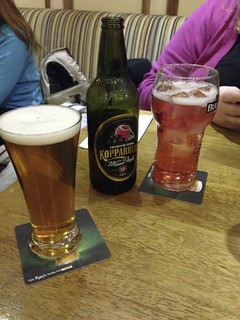 The crab and salmon cakes were quite nice, with a very crisp exterior. 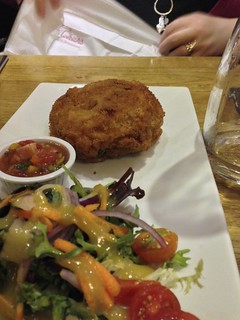 Lori had the chicken rolled with bacon and stuffing, possibly a little complicated but very savory and tasty. 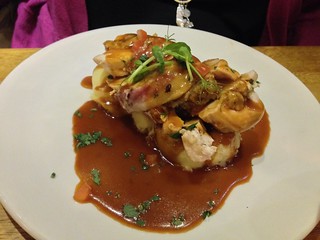 My bacon and cabbage came with a light mustard sauce that made it much lighter than I expected. 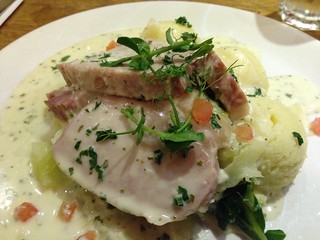 The only thing I didn’t enjoy so much was our apple tart. It was very beautiful, but it had the cakelike crust that we’d encountered with most pies and tarts in the British Isles. 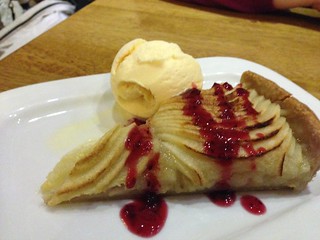